A Wild Rose in a rock garden 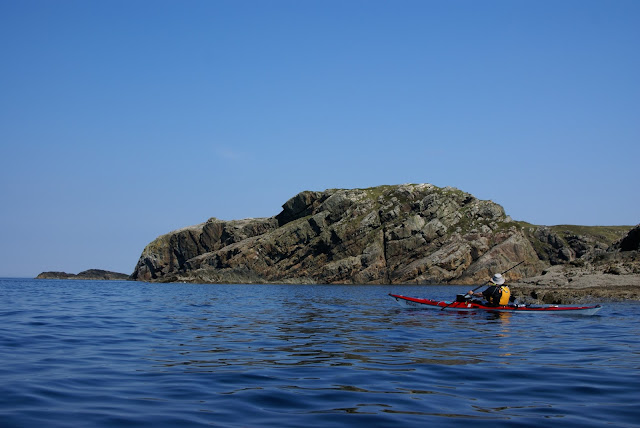 The southwest coast of Iona now opened up to us, a series of headlands, offshore skerries and stacks open to the prevailing weather and swell of the Atlantic.  On this perfect morning all was calm and our pace was relaxed. 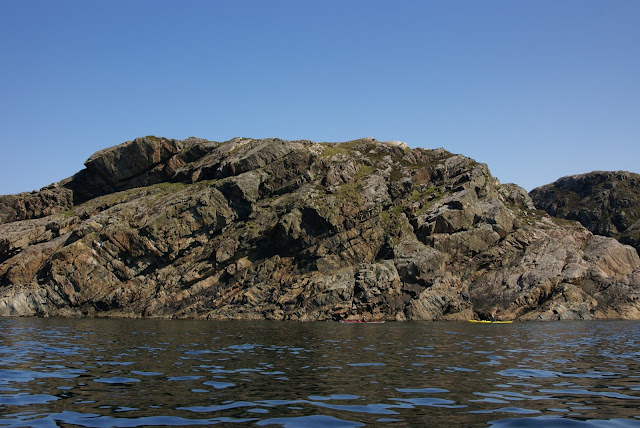 Dipping headlands of Lewisian Gneiss give this part of the island a rugged character similar to the far northwest of Scotland.  When we paddled close in to the rocks we could feel the reflected heat of the sun radiating back. 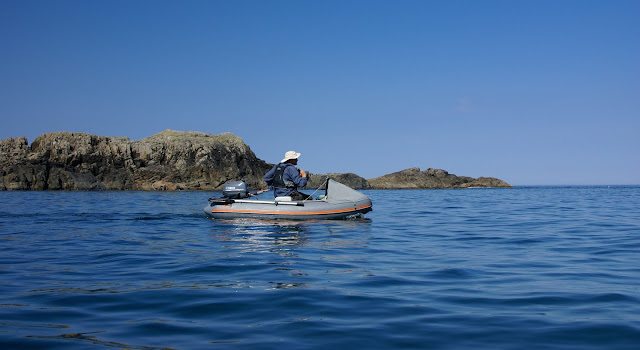 Donald's outboard engine was on bare minimum revs along this section not for fear of catching rocks below the surface, just because this was a great stretch of coast to enjoy slowly.  We reflected on how few days in each year it would be possible to paddle in such great conditions here. 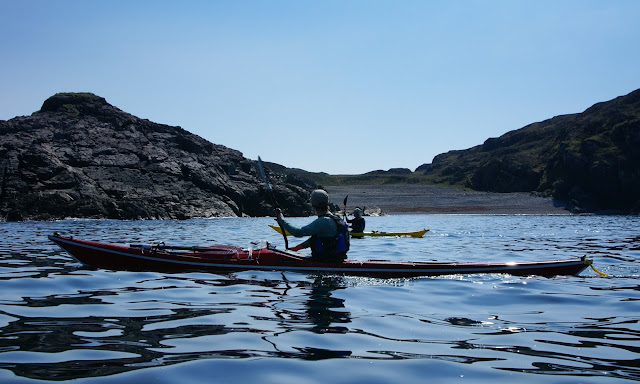 There aren't that many places to land on this part of Iona's shore, but it's said that Columba first landed here at Port na Curaich (Port of the Currach).  A Currach is a traditional Irish boat with a light frame covered in animal hide which was usally rowed but could also be capable of sailing.  The use of Currachs fits with the time of Columba and it seems very likely that he did indeed beach his boat here in 563.  He had previously landed on the Kintyre peninsula but pushed farther north as he could still see Ireland, from which he'd been exiled after a bitter quarrel with another Irish abbot - Finnian, led to the battle of Cul Dreimhe and the death of up to 3,000 men in what has been claimed as the earliest recorded Copyright dispute.

Hopefully Columba and his twelve companions quickly worked out that this steep, shelving beach of shingle exposed to the Atlantic was not the best beach on Iona for boatwork!  We were confident of finding a better spot for luncheon and paddled on past. 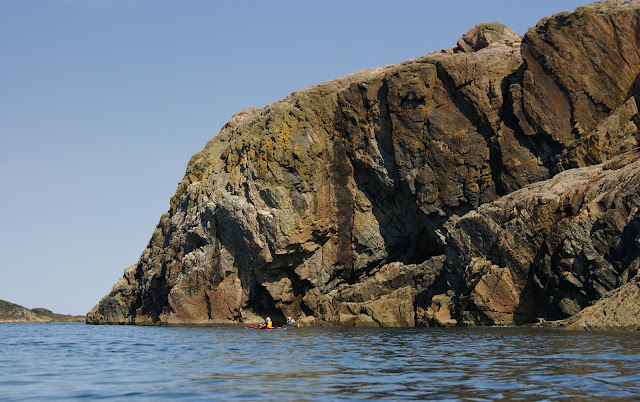 Near Stac an Aoineidh (appropriately "Stack of the Cliff") we felt some tidal flow against us and needed to paddle quite hard for a short stretch........ 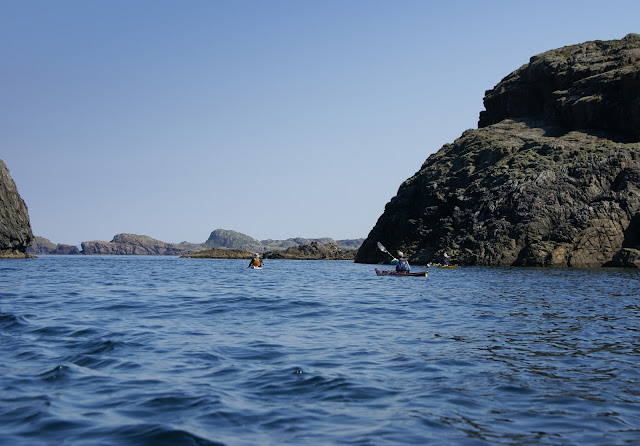 .......through the gap andout to the west coast of Iona.  Ahead in the distance lay more rocky outcrops but first we paddled into the broad bay of Camas Cuil an-t Saimh ("Bay of the back of the Ocean" - a wonderfully descriptive name). 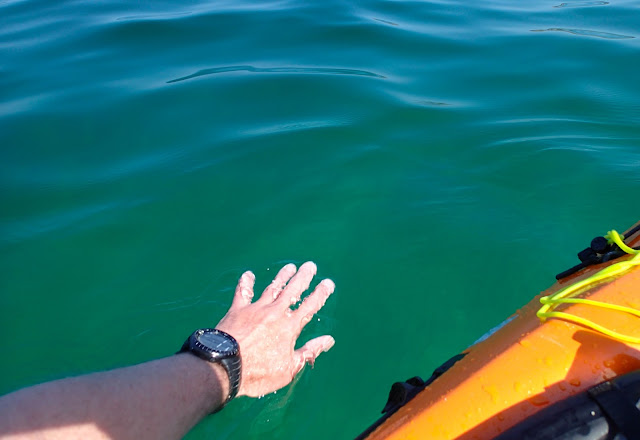 This bay has wonderfully coloured water under sunshine, the sandy bottom was clearly visible many metres below our boats.  The sun was by now hot and it was pleasant to drift along cooling the hands in the water.  A broad beach of sand lies at the head of the bay, but as can be seen from the 1:25K map there are many reefs and hazards - in fact it's a complete rock garden. 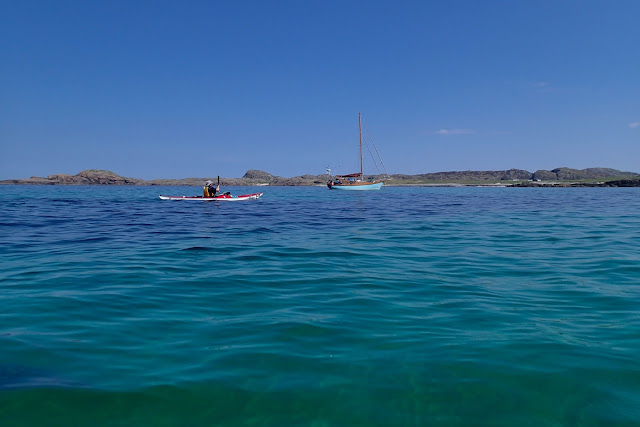 But in the rock garden was a Rose.  "Wild Rose" is a lovely wooden sailing vessel based at Carsaig on the Sound of Jura and built by her owner over a period of five years. We'd seen her the previous evening in Tinker's Hole at the Ross of Mull.  She is beautifully fitted out and maintained and is used for what she was designed for; coastal cruising and exploration.  Her owner should be very, very proud of her.

The stern davits of "Wild Rose" were hanging empty, her crew had gone ashore in the tender to enjoy the beach (though perhaps they could have swum?!). 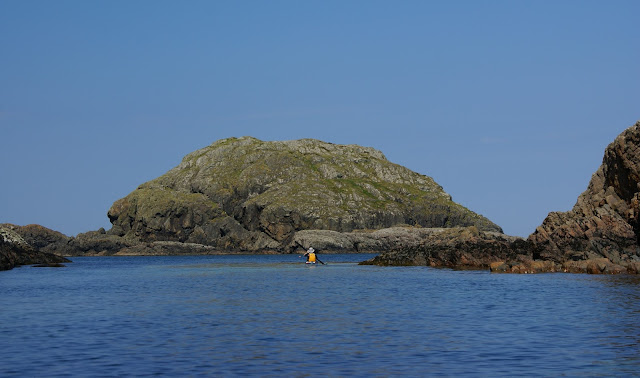 Heading north from Camas Cuil an-t Saimh, we too were looking for a beach....it was high time for first luncheon.
Posted by Ian Johnston at 16:33