Blue boats blasting back from Bute 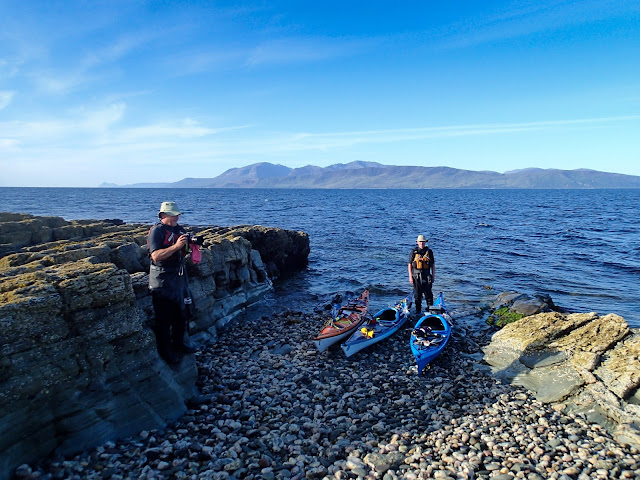 We woke at our camp on the west coast of Inchmarnock to a bright blue day with a WNW breeze to keep the midges away; it looked a perfect day for sea kayak sailing.  After breakfast we moved the boats down to the water - one portage strap is a really useful aid to allow three people to move a loaded boat - and prepared to get going.  Starting the day in a location like this is one of the real joys of camping from a kayak :o) 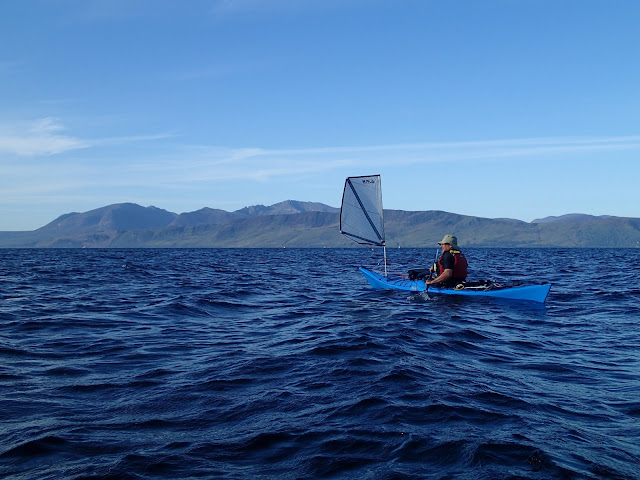 Straight from getting launched we hoisted sails to catch the light breeze.  The colour palette on this morning was most definitely blue; sky, sea and Douglas & Mike's boats all in harmony!

A relaxing and gentle sail downwind took us directly to Ardscalpsie Point on the island of Bute and then around Scalpsie Bay with its resident seal population.  The name "Scalpsie" indicates a place where scallops (shellfish) can be found and that's certainly the case.  When we lived on Bute the beach was a favourite walk and there's a seal viewing point on the road above the point. 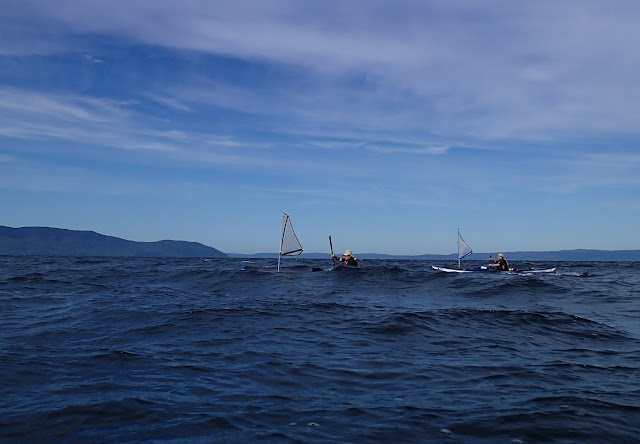 ...let the fun begin!  Our speed rapidly increased with the wind strength while the quickly building small swell was the perfect height and length to enjoy some surfing rides. 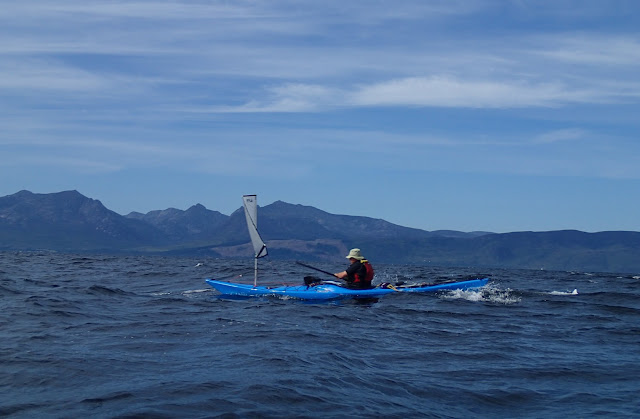 I'm by no means an experienced paddle sailor but do have some dinghy sailing experience from many years ago.  My immediate impression of the FEKS Trade Wind sail was that in these conditions it pulls hard and strong and with a bit more drive than the Code Zero I'd previously borrowed from Douglas.  The drive was steady and predictable...and a whole heap of fun!  This is when sea kayak sailing really comes alive - continue to paddle hard and the boat speed can be adjusted to catch each swell.  The blue boats blasted back past Bute..... 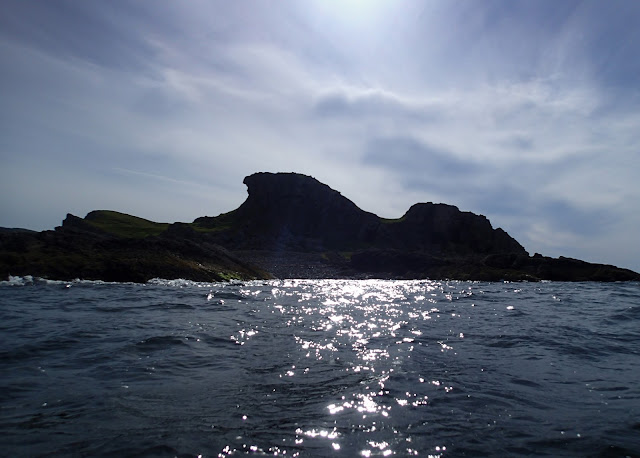 ......flying past the distinctive volcanic outcrops at the south end of the island; this one reallylooks like the dorsal fin of the porpoises we'd seen the previous afternoon. 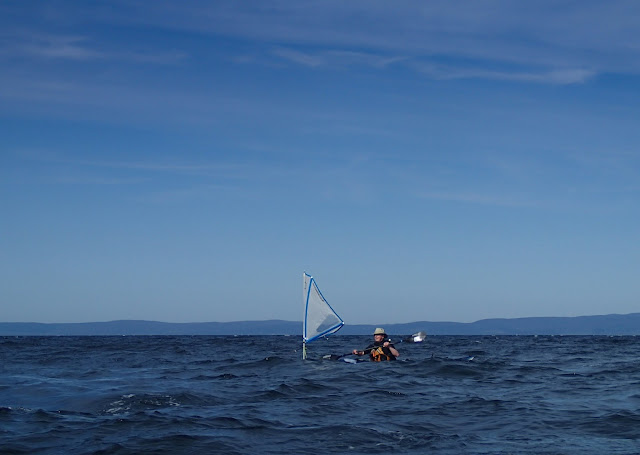 The swell had built quite quickly as the wind blew across the Sound of Bute.  Mike had recently completed some rather skillful fibreglass repairs to his Cetus MV, and although at times we lost sight of his boat, Douglas and I were confident that he was just temporarily between swells! 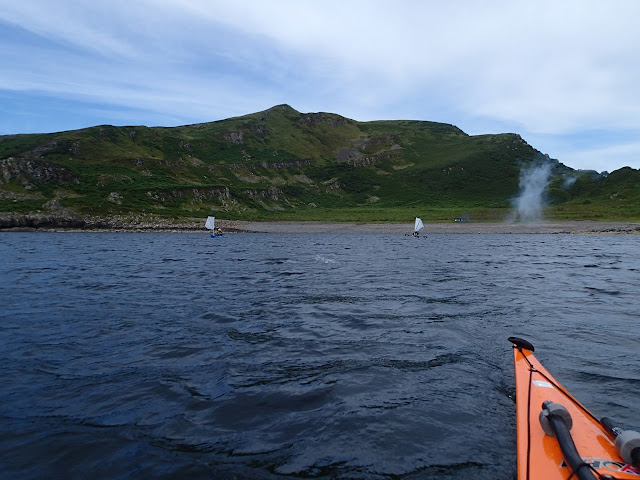 As we rounded Garroch Head at the south end of Bute we came into the wind shadow and out of the swell - thins slowed from the exciting run we'd enjoyed and we paddled ashore at Glencallum Bay for second breakfast.  As we left, a couple of folk camping on the shore were lighting their fire using what appeared to be a fairly incendiary material.... 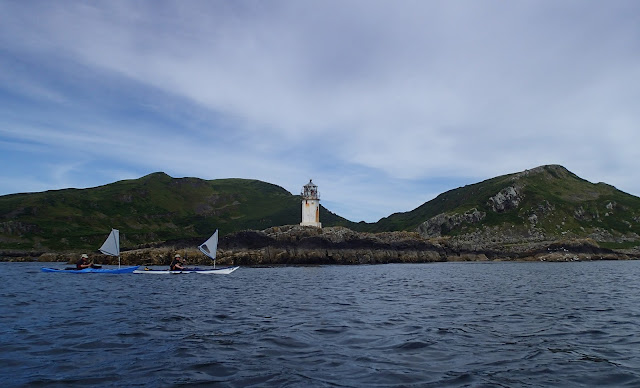 The wind dropped to a very light breeze as we headed past Rubh'an Eun (point of the birds). The small light here marks the port hand side of the main channel for vessels bound for the upper Clyde and flashes red every six seconds. 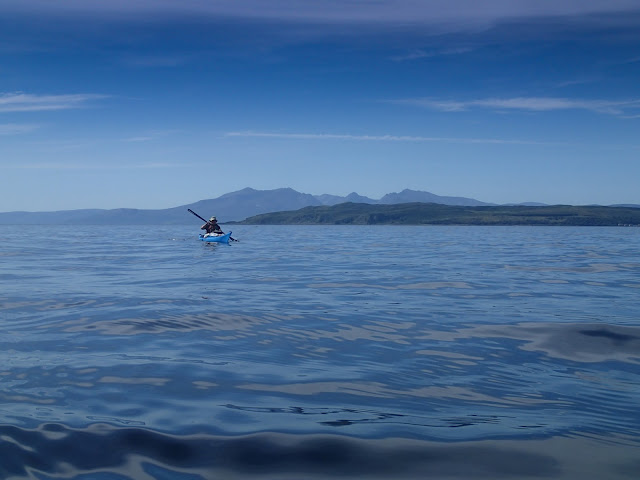 The blue theme of the day continued as we headed across the Clyde towards Great Cumbrae in what had become a glassy calm and very warm afternoon. A large submarine headed down the Clyde and out to sea as we paddled along the coastline.  It had an escort of two large RHIB's which we thought might be manned by Royal Marines.  This thought was reinforced when both boats roared back up the Clyde having escorted the submarine out of the Cumbrae Gap with Meat Loaf's "Bat Out of Hell" blasting from a speaker system! 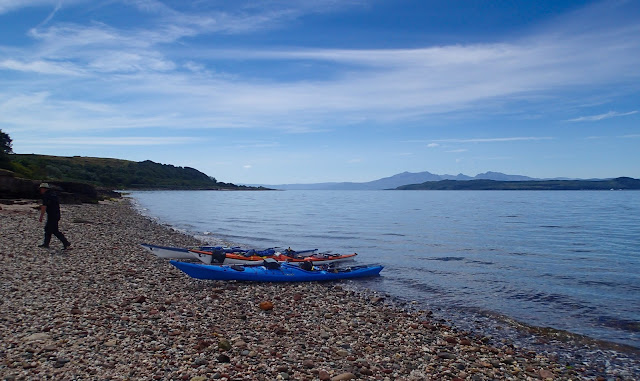 Our final stop was on the pebble shore of Fintray Bay where we enjoyed first luncheon before rounding the north end of Great Cumbrae for a final gentle sail down to the marina at Largs.

We'd been out for a fraction over 24 hours but what a great mini-trip!  In twenty four hours we'd enjoyed the wildlife of the Clyde with porpoises, Gannets and Shearwaters aplenty; had a super wild camp in a place which seems utterly remote from the bustle of a big city just 45 kilometres distant; we'd visited four islands and had the most superb "blue day" blast under sail. You'll be able to read about this trip in "Sea Kayak Stereovision" at Douglas' blog starting here.

To just head out with a couple of like-minded friends on small trips like this is absolutely one of life's joys.  I'd been away a long time...it was so good to be back.