Island Hopping on the Clyde - Little Cumbrae and Bute

In the chilly pre-dawn of a January morning, four of us met up at Ardrossan Ferry terminal on the Clyde.  We would have been very early for the first sailing of the day, but we weren't planning to get the ferry just yet. 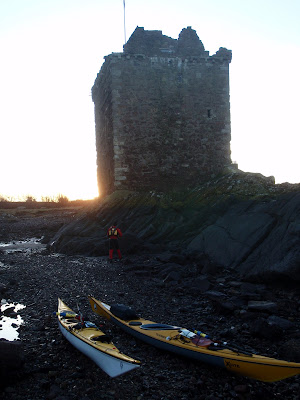 Mike, Phil, Douglas and I were setting out on our own version of an "Island Hopper" ticket - and one for which we would need just a single ferry journey.  We left two cars at Ardrossan and moved a little further north to launch at sunrise from a tiny beach below Portencross Castle.  It will be well worth looking at Douglas' blog for his report of our trip. 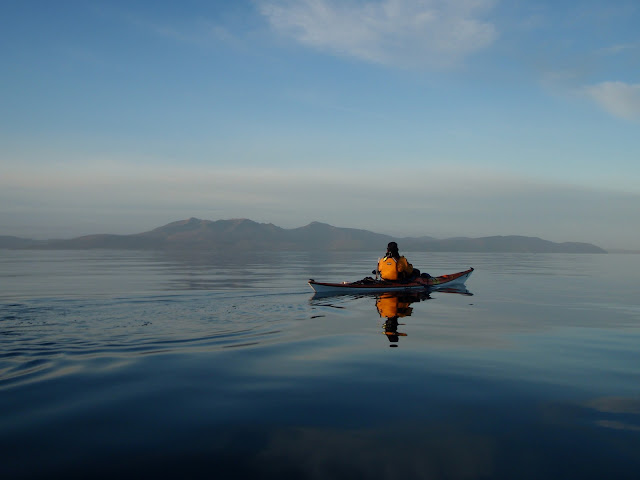 We paddled out from the shade of the castle into a glorious winter morning.  There wasn't a breath of wind and there was even a hint of warmth in the sun on our backs.  Away across the Firth of Clyde the distinctive skyline of Arran emerged from the dawn haze. 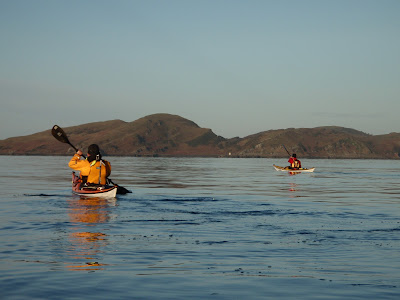 The first stage of our trip took us towards Gull Point, the southern tip of Little Cumbrae.  We could clearly hear the terriers at the castle on the Wee Cumbrae barking madly over two miles of water - surely they hadn't detected the likelihood of lunch in our boats at that range?! 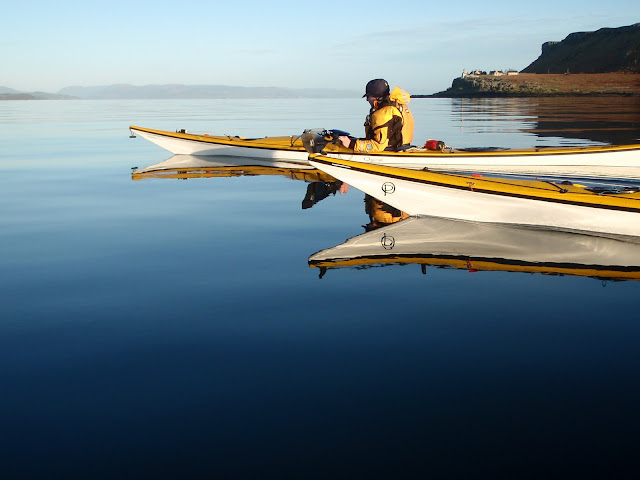 If so, the wee dogs would be disappointed; we didn't stop at Gull Point, but continued our paddle north west.  Conditions could really only be described as idyllic, the reflections of our boats gleaming off a burnished sea and the rich colours of the winter landscape glowing in the low sunlight. 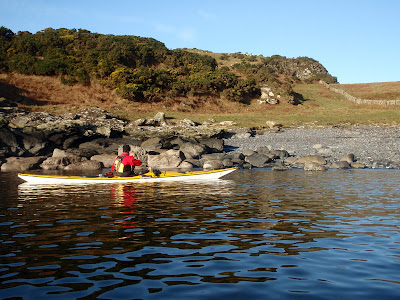 We crossed the main Clyde channel and landed on the south end of the Isle of Bute at Port Leithne, a little way east of Garroch Head.

As we got out our stoves and flasks, a dilemma presented itself - was this second breakfast or first luncheon?  The question was of critical importance.  A brief discussion ensued along with some assessment of solar declination; we decided that as the sun was over the yardarm (for a given value of yardarm height!) this could indeed be considered to be first luncheon.  Our arrival on Bute could therefore be toasted with a nip of  10 year old Jura.

We sat in the sun enjoying a superb view of Arran and the outer Clyde with a hot drink and food in our hands.  It was Friday 13th January - but we considered ourselves to be blessed with great good fortune.
Posted by Ian Johnston at 18:37