Island Hopping on the Clyde - a big view to Arran 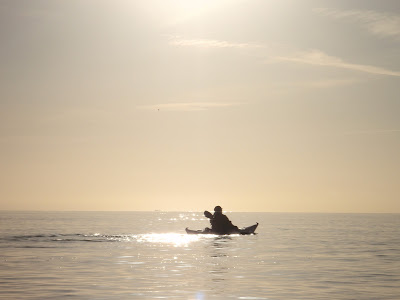 We left the shore on Bute and paddled out into a blaze of light.  Passing Garroch Head can sometimes be tricky; on the ebb tide two streams running down the west and east side of Bute converge here in an energetic tide race.  No such problems today though as we paddled serenely past during the last part of the flood tide. 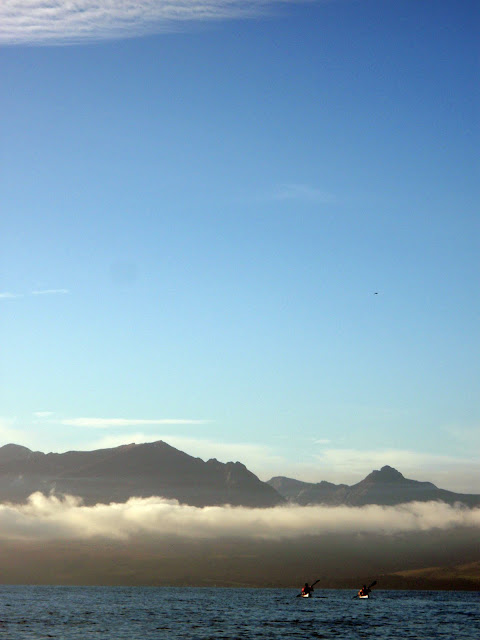 The crossing to Arran is just over 10 kilometres point to point, but more like 12 with the drift of the tide which pushed us north as we crossed.  Long crossings aren't normally my favourite type of paddling, but with a view like this ahead and good company on the way, this crossing was a pure joy.

Arran's ridges got more dramatic as we approached, the thin band of cloud which had been present since just after dawn constantly shifted and changed.  The view was simply stunning. 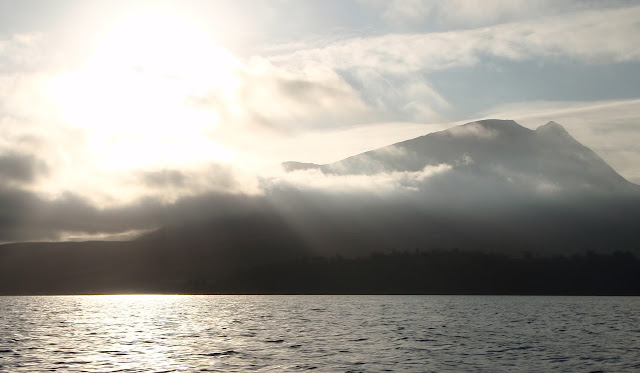 As we neared, the low sun skimmed behind the cloud band and created a dramatic show of light and shade, the ridges alternately hidden behind luminous mist and then thrown into sharp silhouette. 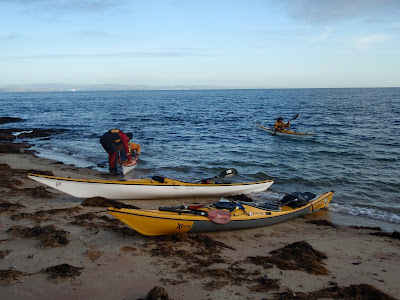 Paddling south along the shore for a little way we rounded a small point and landed on the sandy beach at Sannox Bay.  A thin breze had got up so we moved above the beach into the shelter of some gorse bushes.  This time we needed no debate, this was definitely second luncheon; our arrival on Arran was toasted with a nip of 14 year old Glenfiddich.

Second luncheon brought out our food again, with honours going to Mike who produced his stove and a frying pan to cook bacon and egg sandwiches using eggs from his own hens, followed by fresh coffee.  There is truly no requirement to suffer on a trip such as this! 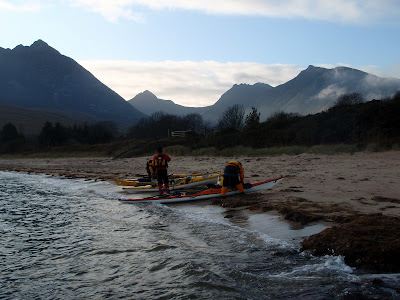 Leaving Sannox, we had 9 kilometres of paddling to the ferry terminal at Brodick.  Initially we thought we'd left our timing a little tight so we pushed on south past Corrie and along a pretty shore with the smell of woodsmoke from the houses along the shore pervading our nostrils.  Phil and I had a good view of an Otter hunting at Merkland Point before we pulled into a glassy calm Brodick Bay at sunset.

We had plenty of time to cross the bay, land on a beach next to the ferry terminal and purchase single tickets to complete our "Island Hopper" adventure. Changing into our spare clothes for the ferry journey, we celebrated the trip with a nip of 10 year old Jura before putting our boats onto trollies for boarding.

The regular ferry "Caledonian Isles" is off service for refit, so we travelled back to the mainland on LOTI (MV Lord of the Isles).  If taken onboard by trolley, kayaks travel free on Caledonian MacBrayne ferries. We were boarded first and our boats placed safely on the car deck.  As so often, the crew were friendly and curious about our trip. The day was rounded off with a hot meal in the cafeteria and an hour later we disembarked in Ardrossan to run the shuttle to Portencross.

Paddling to Arran from the mainland has long been on my "must do" list.  To do this trip with such great company and in such fine weather really was the icing on the cake.

Days like these - they're what life is made for.
Posted by Ian Johnston at 19:28