Summer sojourn on the Moray Firth - sealed with a kiss

Almost as soon as we'd paddled through the tall cave-arch from among the red towers we were joined by another young Grey Seal (Halichoerus grypus). 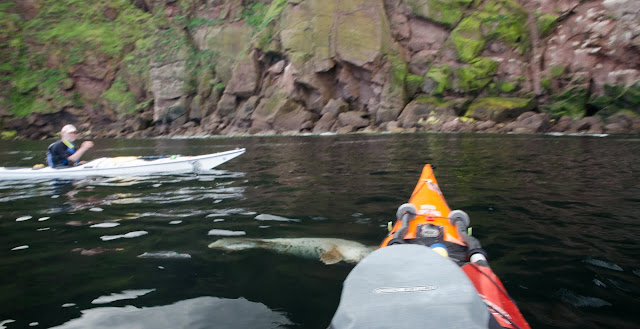 Just as curious and confiding as the one we'd encountered earlier in the day, it swam repeatedly around and behind us before approaching each of our kayaks in turn to investigate us more closely.  As it padded under the bow of my boat there was the faintest kiss from its muzzle and flipper - perhaps trying to figure out what the boat felt like. 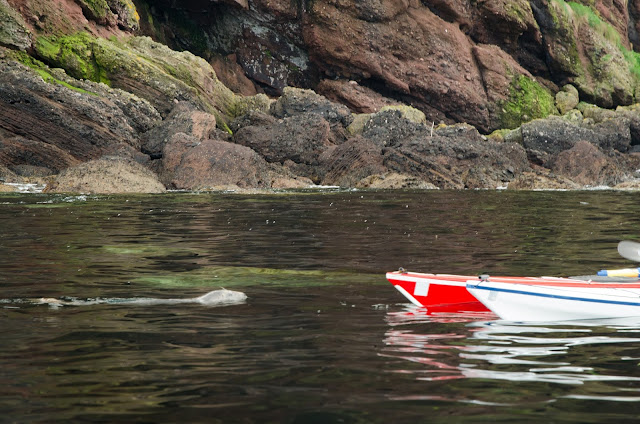 The youngster followed us for a couple of kilometres, never far from us but never so close as to cause alarm to either it or us.  Adult Atlantic Grey Seals are Europe's largest native carnivore; bulls can weigh in at up to 300Kg and reach around 3 metres in length - they are animals to respect.  This little seal - we weren't able to tell whether it was male or female, but suspect male - was less than half that, but still a wild animal and the fact that  it chose to accompany us made for a special encounter. 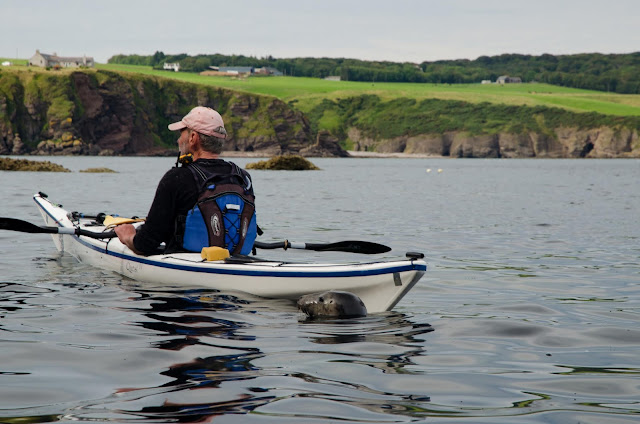 When we stopped, so did it.  Completely relaxed in our company, it seemed to relish the encounter as much as we did.  Whilst I don't lke to anthropomorphise animal behaviour, it really seemed like this young seal which was on its own was enjoying the company. 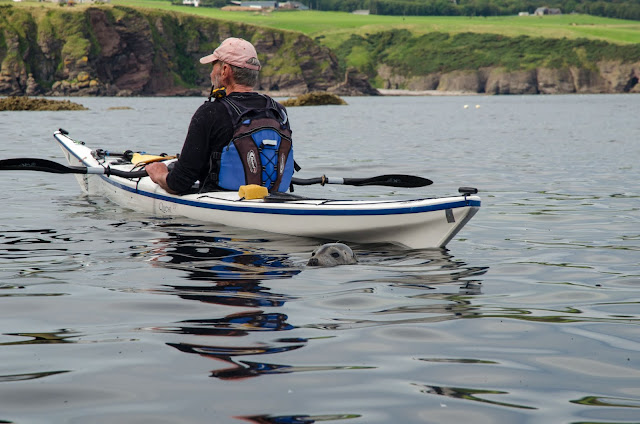 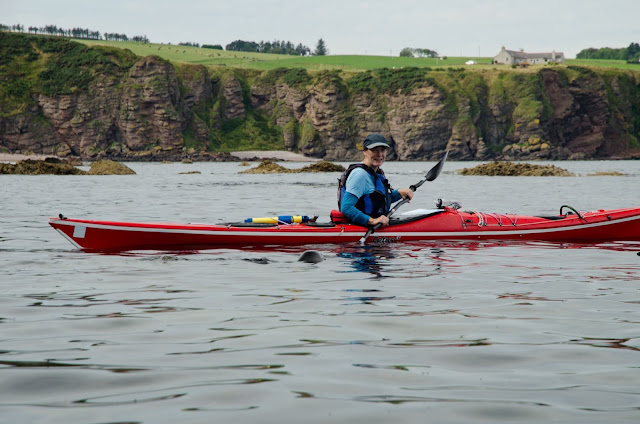 As we approached Pennan harbour the seal pulled up alongside us, then turned and headed back along the cliffs.  It's possible that it was wary of going too near the harbour due to the level of motorised boat traffic, or perhaps it had reached the end of its patch, or just had had enough of accompanying us. We encounter seals almost every time we paddle on the sea, and try as we might we sometimes take sightings a bit for granted.  But when an encounter with a wild animal is so intimate, and especially when initiated by the animal - it's a special experience. 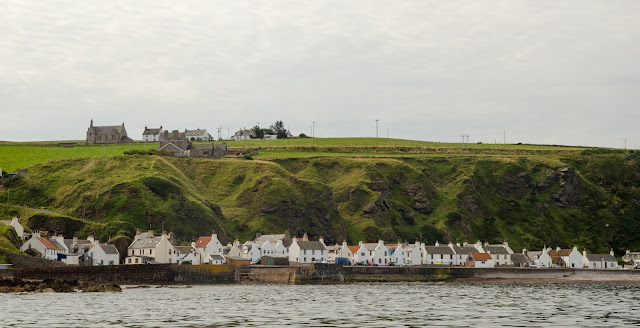 The pretty village of Pennan was our destination for this paddle.  A line of cottages strung along the shore beneath a low cliff, it's one of the most picturesque of Aberdeenshire's many fishing villages.  A claim to fame for the village is in it's role as a setting for the 1983 film "Local Hero". 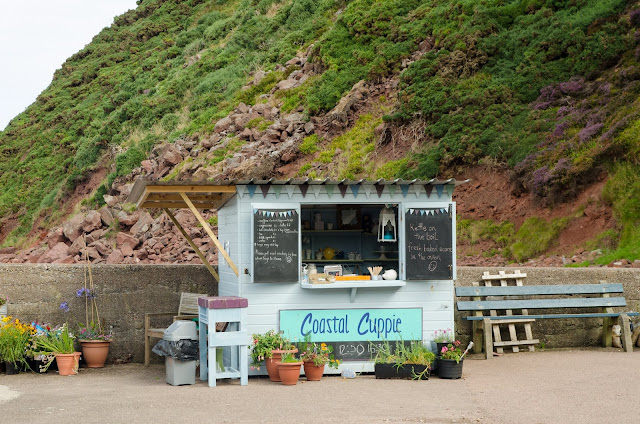 A development since we last visited is the Coastal Cuppie, a tea shop with a bit of a difference.  Housed in a converted wooden shed, its a bright spot in the harbour.  It looked open, but the sign said "Kettle on the boil, scones in the oven", while another said "open at 1250".  We had a half hour to wait and so took a stroll along the village and back, where the scones were just arriving in a little pull-along cart.  We can report that both coffee and scones were wonderful! 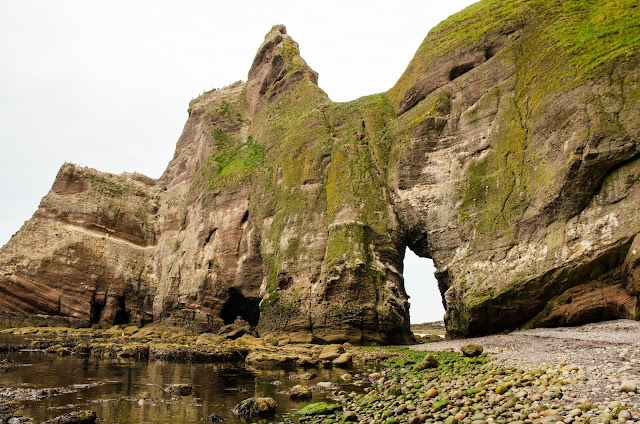 By the time we headed back along towards New Aberdour on our return leg the tide had dropped considerably.  The tall arch we'd paddled through was completely dry and we landed to walk through.  We recommend paddling this section of coast as near to high water as possible, and to save it for very calm conditions in order to get the best of it and to paddle all the caves, stacks and arches.  I've been here in a moderate onshore swell and been unable to get anywhere near the rocks. 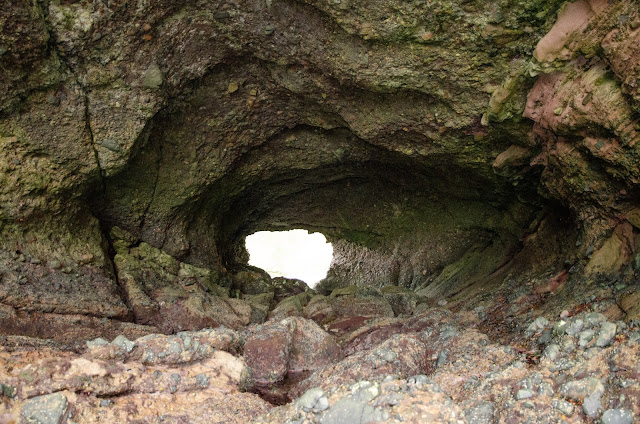 Nearby, a cave right through a stack was revealed which would usually be submerged.  I took a look and found the rocks to be very slippery, but the effort was worth it...... .....because inside, several rock pools were lined with what seemed to be coral of a vibrant pink shade.

The final day of our three day's route on the Moray Firth had been different to the preceding two days of a continuous linear route, but had, once again, given so much.  These three days were almost the last of the settled summer conditions - late August and most of September were mostly unsettled, so we counted ourselves doubly lucky!
Posted by Ian Johnston at 20:58