Summer sojourn on the Moray Firth - Sandend to Whitehills

Our camp site for the night had been the very pleasant Sandend Caravan Park (which also has tent pitches).  Wild camping isn't so easy to find on this part of the coast, so this was a perfect base - especially as we were able to carry our boats straight onto the glorious Sandend beach to launch. 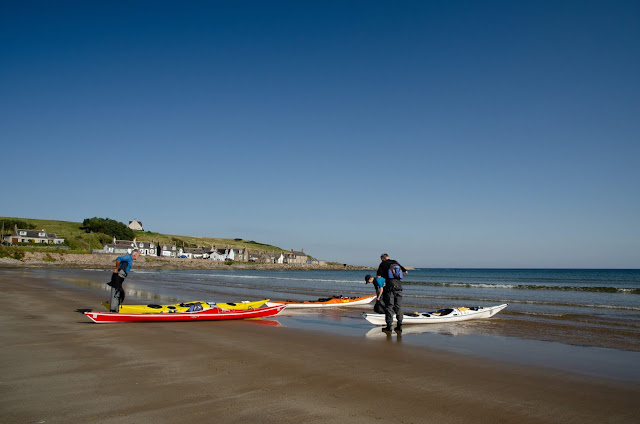 It was going to be another cracking day, hot sunshine, light winds and low swell, ideal conditions for sea kayaking on this predominantly rocky coast. 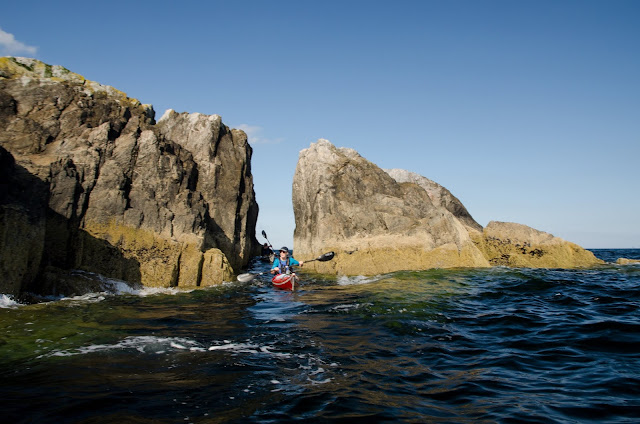 The fun starts almost straight away with a series of narrow channels piercing the West Head.  Confusingly, this to the east of Sandend....it's actually the West Head in relation to the bigger harbour and town of Portsoy. 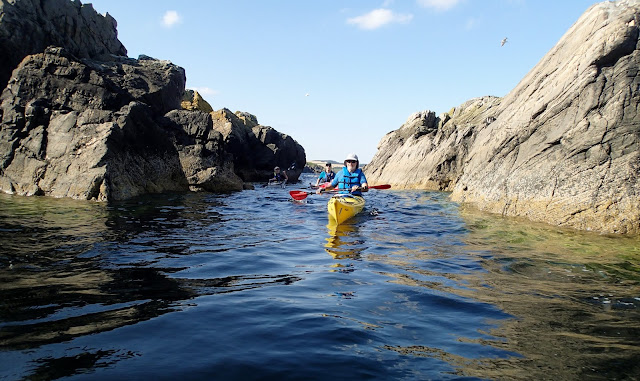 Often the swell at this exposed spot is too high to get safely through thes chanels, but no such problem today - it really couldn't have been better.  Allan, Lorna and I have paddled this coast many times and it never pales - but this was Raymond's first visit and it was great to share it with him. 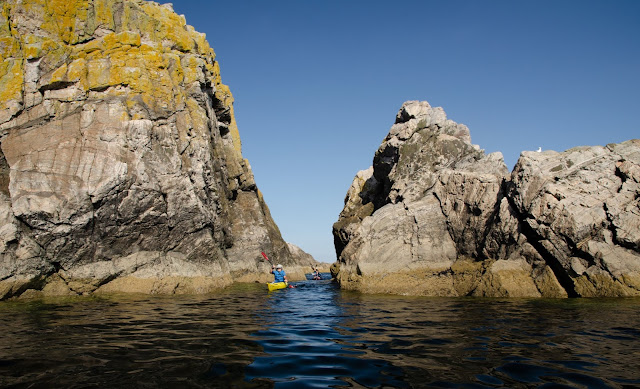 We passed through the third channel at Redhythe Point and paddled slowly on along sheer cliffs.  Raymond asked if this was the end of the rock architecture so early in the day...... 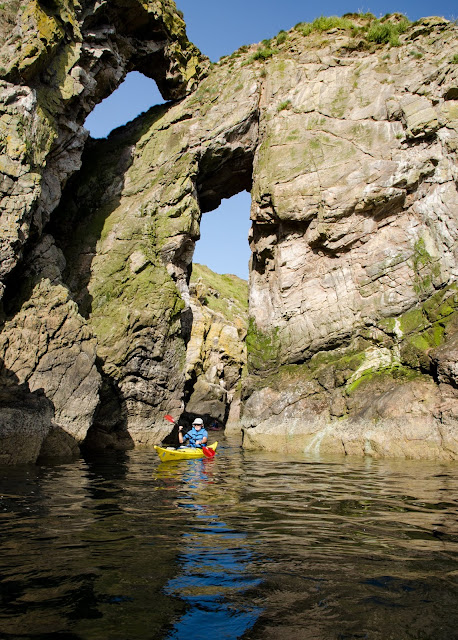 ...erm, Nope! A fine double arch is the next delight, almost invisible unless you happen across it or know exactly where to look as it's hidden behind a buttressed cliff. A pool at the back can be entered at most states of the tide so that you can paddle it in either direction - or both directions as we did. 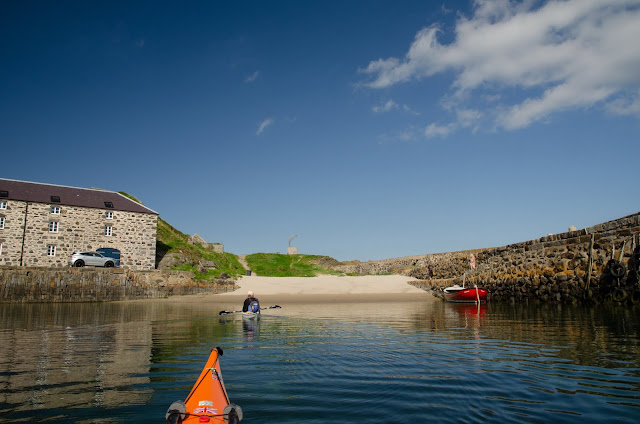 A short distance further to the east is the lovely harbour of Portsoy.  Actually two harbours, the older one dating from 1692 is unusual in being constructed of large stones set vertically.  A white sand beach at the back makes for a pleasant stop.  The red boat in this image is a very solidly constructed clinker built traditional fishing boat made in Denmark nearly a hundred years ago and still very much seaworthy and serviceable - she featured alongside Portsoy harbour in the 2016 remake of the film "Whisky Galore" 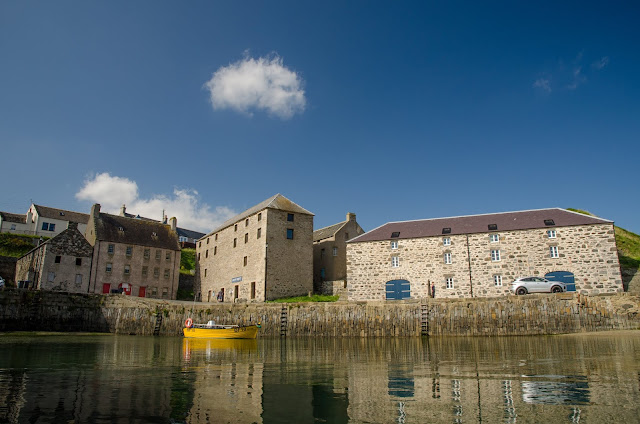 It's easy to see why you'd choose this harbour as a film location, it has great charm and is very well kept.  Each June Portsoy hosts the Scottish Traditional Boat Festival....when it's a lot busier than this!  Some of the warehouses around the harbour were used to store and trade Portsoy Marble, a red and green serpentine much in demand at one time.  Although the trade is long diminished, you can still buy items made from this unusual stone locally. 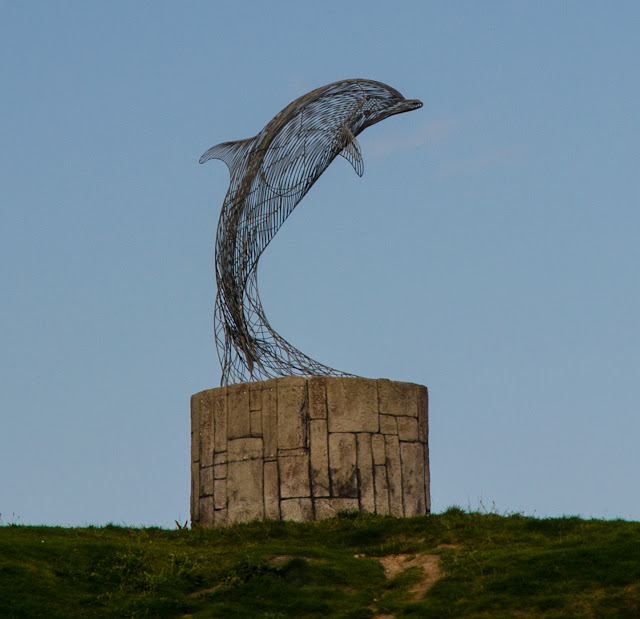 A modern addition to the harbour is this very evocative life-sized sculpture of one of the Moray Firth's Bottlenose Dolphins created by the artist Carn Standing in 2016.  It's a striking, graceful piece and adds to the public sculpture which Scotland is becoming so good at hosting and producing. 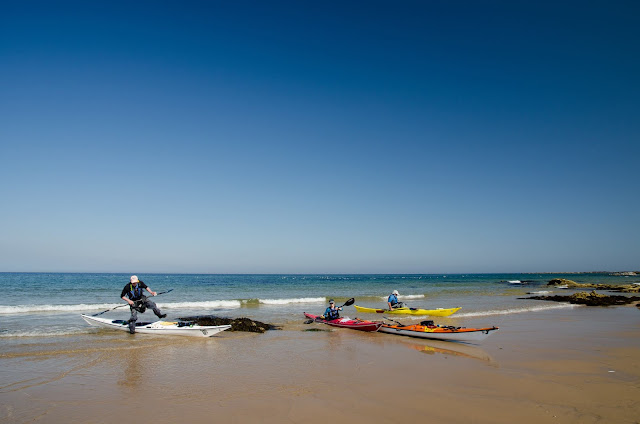 After a break for coffee at Portsoy we continued east with a warm afternoon sun on our backs, passing a couple of lovely small beaches which are the favoured haul-outs of Grey Seals before landing at a third one.  Difficult of acces from landward, these beaches are almost always deserted and simply lovely places to spend some time.  We almost dozed off in the warm sunshine, with a gentle hiss of rhythmic waves and glorious summer colours to add to the relaxing effect. 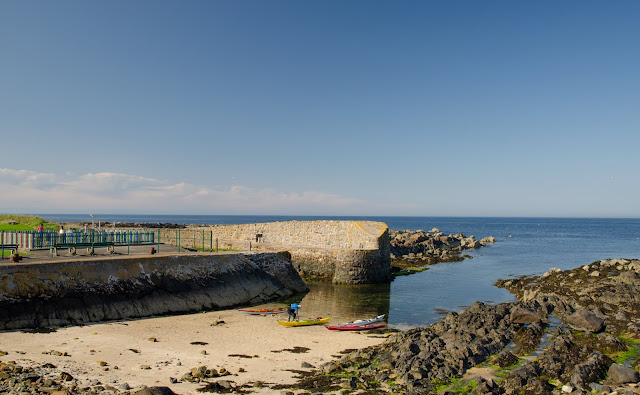 The last leg took us along a stretch of lower lying coast with jagged reefs running out to sea - it's a place to be wary in a sea kayak or any other craft.  We continued past the main harbour at Whitehills, once a busy whitefish port but now developed to become the largest leisure boat marina on the Moray Firth.  Our landing point was a tiny harbour to the east, once home to an 18th century brickworks which produced clay pipes as well as bricks.  It was demolished in 1978 and a caravan park now stands on the site.  The tiny harbour gives a good landing spot and there are still lots of brick fragments lying among the pebbles in the harbour.

Our first two days of paddling had taken us from Findochty to Whitehills amongst some of the best sea kayaking anywhere - rock arches, caves, cliffs, channels, friendly harbours, caves, a castle and several stunning beaches - this area really has so much to offer (but we would say that as it's our local patch!).  We still had another day of good weather before strong winds nd rain would arrive...and we had the pleasant dilemma of where to paddle the following day.  We headed back to our camp at Sandend to discuss the options.....
Posted by Ian Johnston at 21:29