The first couple of days of our Hebridean holiday had been spent exploring Lewis from our base in Harris. The two are actually one island, but considered as separate entities.  The largest of the Scottish islands, Lewis and Harris are quite different from each other. 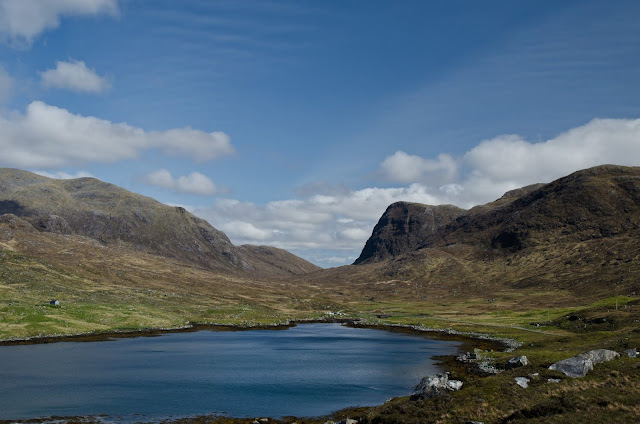 Where Lewis is fairly flat and has a landscape dominated by peat bogs, Harris is mountainous and has a rugged, rocky landscape fringed with jewel like beaches.  Harris itself is divided into North and South Harris, and is almost cut in two by the sea at Tarbert, the main settlement.  As elsewhere on the west coast and in the islands, the name "Tarbert" indicates a narrow neck of land between two bodies of water - the name derives from a Norse word meaning "draw-boat" and indicates a place where a longship could be hauled from one body of water to another across the land.

Great eagle country, North Harris has the highest population density of eagles anywhere in northern Europe and we were to see both Golden and Sea Eagles regularly, sometimes at close quarters.

But the thing that Harris is most notable for is the stunning quality of light.  We'd deliberately not gone to visit the coast while the weather was dull and wet, but the third day of our trip dawned bright and sunny, so we headed west........... 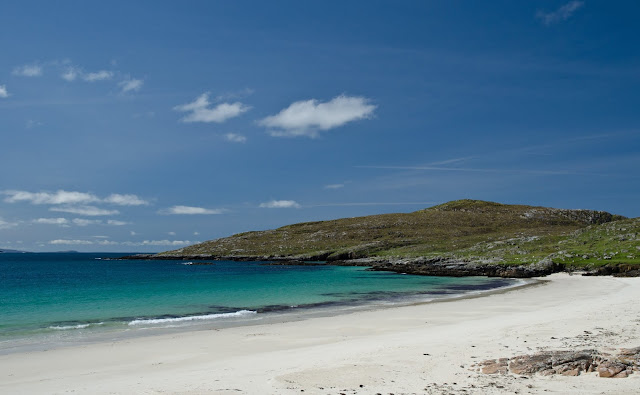 ....to Huisinis, a crescent of white sand fringed with aquamarine and deep blue - this is what we'd come for!  The journey from Tarbert along a narrow, twisting single-track road takes much longer than the mileage would suggest - and this is a good thing.  Spectacular views, a landscape in parts otherwordly and wildlife (we had two good views of Golden Eagles above the road) are a great introduction, and the destination is well worth the effort.  Huisinis Bay faces south and was sheltered from a brisk northerly breeze; the sun was hot rather than warm which added to the impression of a slice of the tropics adrift in the Hebrides. 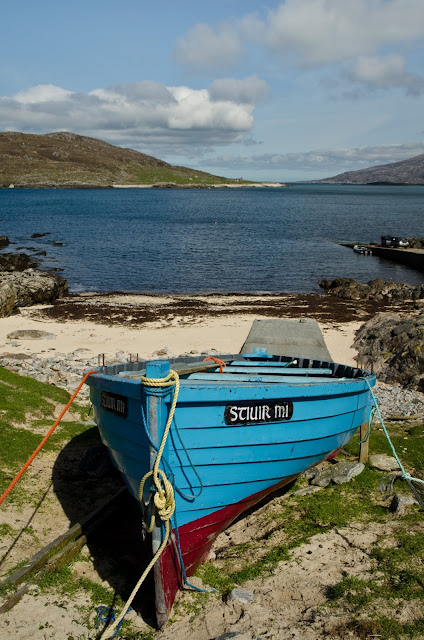 We strolled across the machair to the northern bay which has a good view up the Caolas Scarp.  The last time I was here was in 2011 and I was very much looking forward to more exploration of the area. A slipway gives access to the water, and this is was the only viable landing point when the island of Scarp was fully inhabited - these days there's just a couple of holiday homes and an occasionally used croft house.

I did my own bit of "draw boat" by pulling my kayak on a trolley over the machair path to launch from the slipway.  The northerly wind blowing down the Caolas (Kyle) an Scarp made for a bit of swell and a tricky launch but I got underway and headed out between Scarp, on the left of this image, and Harris.  I considered myself very fortunate - the kyle is shallow and in heavy weather swells break right across from shore to shore and travel the length of the channel, cutting off Scarp for days at a time. My first destination was the white sand beach on the right of the image..... 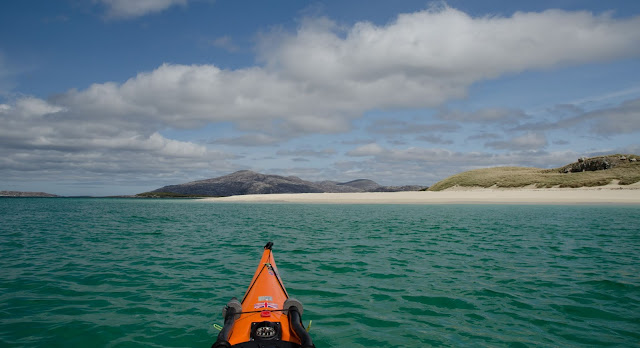 ....which is actually the end of a curving beach backed by low dunes.  As I moved into shallower water the colours began to grow in intensity..... 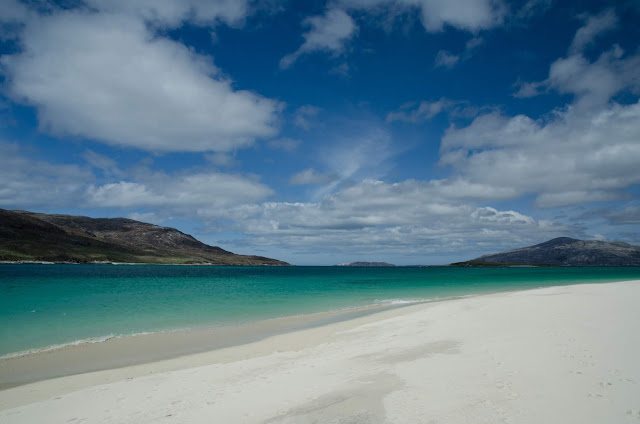 ......until they reached a crescendo as I landed on the shore and the sun emerged from behind high cloud.  This is the quintessential Harris scene, dazzling white sand and a sea of aquamarine, turquoise and violet shades.  It could scarcely get any more stunning.... 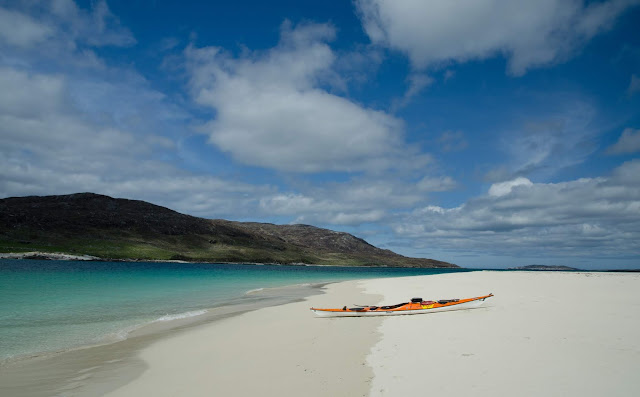 ...unless you add a brightly coloured sea kayak into the picture!  I spent a good time just strolling around on this beach, allowing the colours and the pure brilliance of the light to fully register.
Posted by Ian Johnston at 22:08