"Oh mist rolling in from the sea" 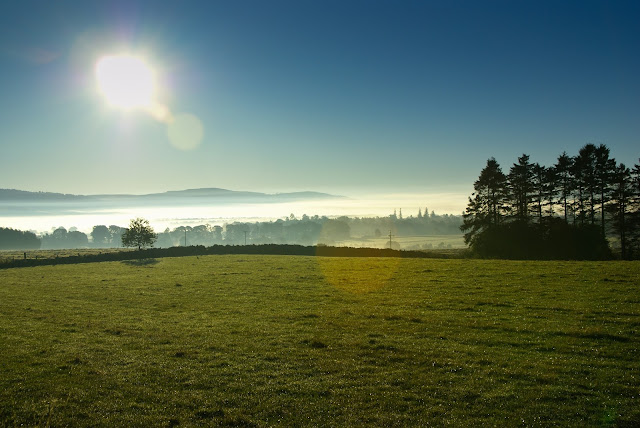 With a spell of settled weather in the forecast, Douglas and I exchanged text messages and a brief phone call - it was time for another trip!  As the swell was forecast to be unusually low on Scotland's west coast for several days we decided to visit the islands of Gigha and Cara which are fully exposed to the Atlantic; paddling here is very dependent upon swell conditions and although Douglas has visited both islands it would be my first time.

You will be able to follow this trip in "Sea Kayaking Stereovision" by reading Douglas' account of the trip starting here :o)

Thoughts of paddling under blue skies over white sand and turquoise water were more than compensation for the long six hour drive from home....I left home on a sparkling autumnal morning. 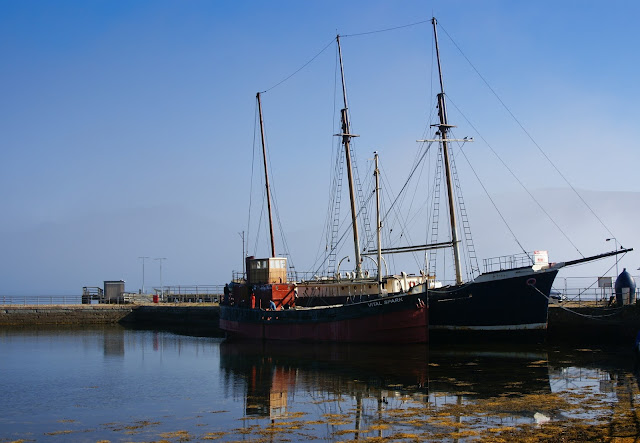 Some hours later after a tortuous drive across country I stopped for a break at Inverary where a hint of sea fog had reached right up Loch Fyne.  In the sun it was warm, in the fog patches it was several degrees cooler.

The sailing vessel "Arctic Penguin" is a familiar sight in Inverary harbour.  Built in Dublin in 1910 she served as a lighthouse tender under the name "LV Penguin" until 1966.  Sold out of the lighthouse service she was converted from square rig to fore-and-aft schooner rig and utilised as a sail training vessel until 1982, she was sold again in 1988 and under her new owners hit a rock, sank, was salvaged and laid up in Refrew on the River Clyde.  She is now a museum and is up for sale, but looks to need considerable work if she's ever to sail again.

Outboard of Arctic Penguin is a Clyde Puffer which bears a famous name- "Vital Spark".  Well, almost, she's actually named "Vital Spark of Glasgow".  Built in 1944 by Brown's shipyard in Hull for naval dockyard service, she was originally named "VIC 72" (VIC stands for Victualling Inshore Craft).  After being decommisssioned from naval service she was bought and employed working from Troon as the "Elseda", being converted from steam to diesel engine at this time.

In 1984, she was sold to the owner of Easdale Island, near Oban, and was renamed "Eilean Easdeal" to run a inter-island cargo service around the Western Isles until 1994 (when the Scottish Office withdrew its subsidy for Scottish Shipping). In 2001, she was brought to the Inveraray Maritime Museum, where she still is, and in 2006, she was re-registered as "Vital Spark of Glasgow". 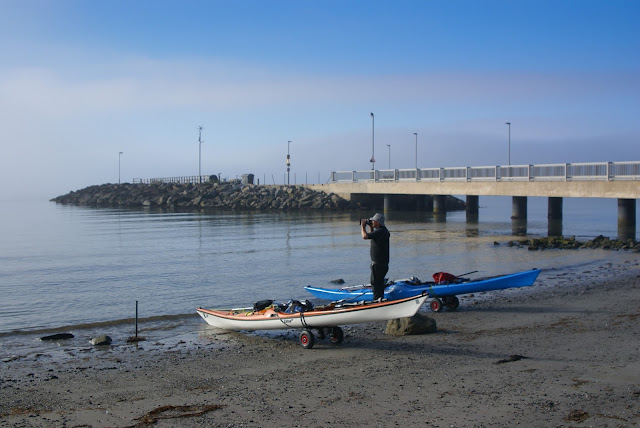 Douglas and I met at Tayinloan, and as it was already early afternoon we treated ourselves to coffee and cake at  Big Jessie's Tearoom - we can report that both were excellent! 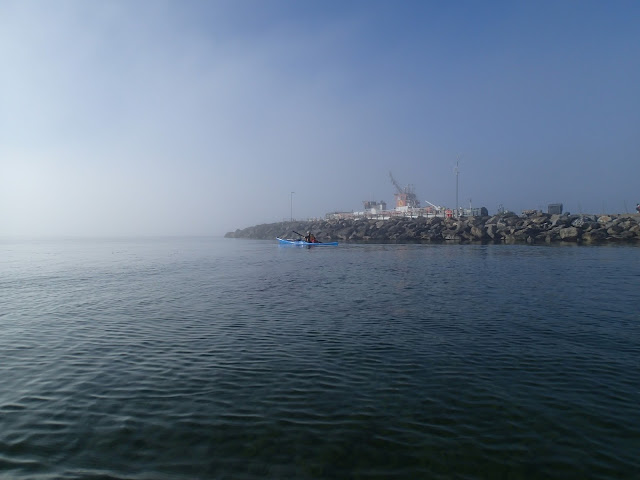 As we were setting off we were hailed by the master of the Calmac ferry MV Loch Ranza, the ferry from Tayinloan to Gigha.  We had a conversation on VHF about the visibilty which was reported to be considerably less than half a cable (100 yards) in the Sound of Gigha.  He was (rightly) concerned that we knew what conditions were like, and also our likely route as he wouldn't be able to see us on his next crossing.

We explained that we were prepared for low visibility, that we had VHF, GPS, compasses and signalling devices and that we already planned to cross the Sound well to the south of the ferry track.  We would also keep Loch Ranza informed of our arrival at our destination so that he'd know we were safely on the Gigha side of the channel.  The "heads up" for visibility and the ferry master's understandable concern were actually welcome - and he was reassured by the fact that we appeared to be well prepared and had planned for the conditions. 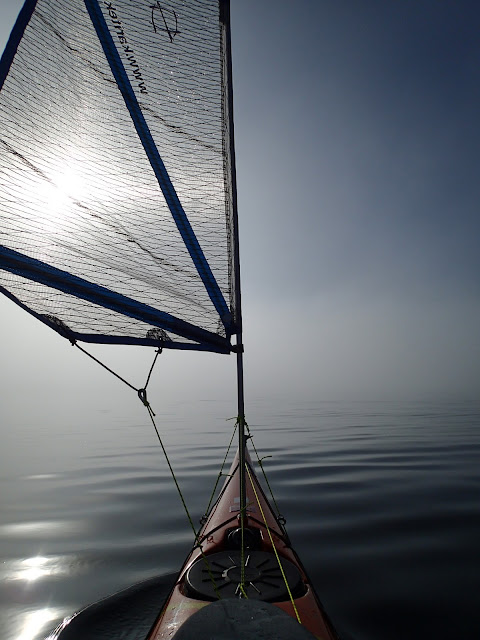 The lightest of breezes encouraged us to hoist sails on the crossing, and we left them up even when it died away so as to increase our likelihood of being seen.  We set out on a transit which took into account the considerable tidal movement in the Sound of Gigha..... 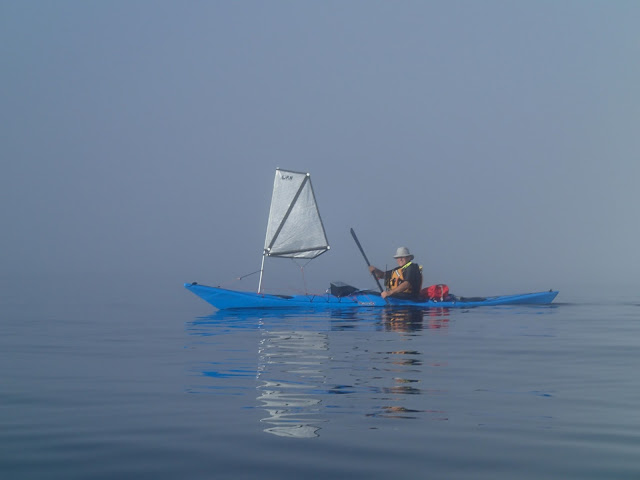 ....and we of course kept in close formation as we crossed.  At first the sun seemed to be winning the contest with the mist, but gradually visibility closed in.  We weren't surprised to find sea fog here, after all this is Kintyre and the nearby Mull of Kintyre is best known to many people through Paul McCartney's song of the same name! 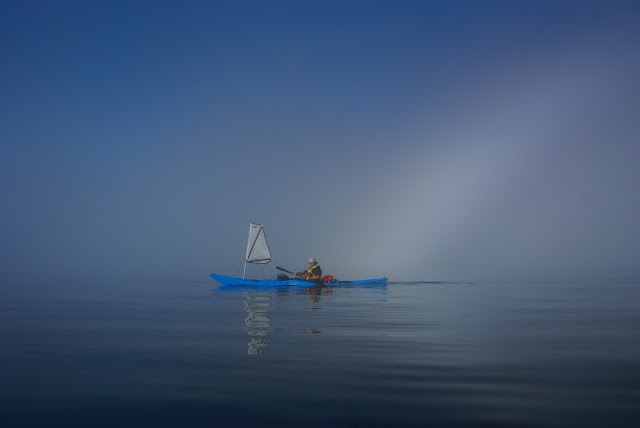 At roughly the middle of the Sound of Gigha the sun shining through the mist began to create a most magical effect..... 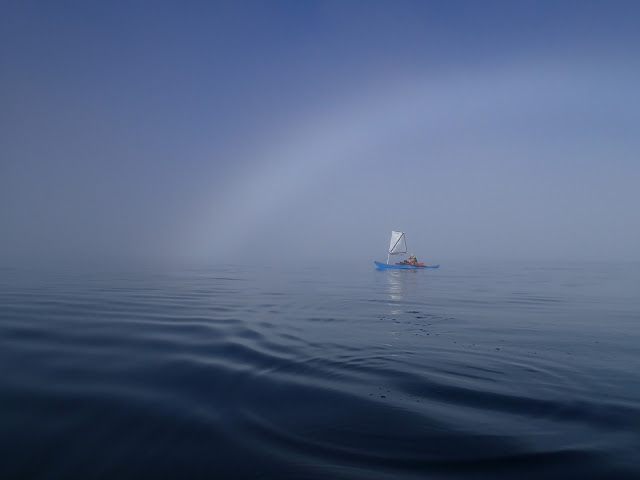 ...which gradually developed as we watched.  A fogbow is a relatively rare phenomenon and we were treated to a really beautiful example.  As with Brocken Spectres, we each saw the fogbow in a different way - a truly wonderful experience.