This is a catch-up post from a walk in upper Donside in the second half of April.  Lorna, Allan and I have explored many of the area's tracks, especially when Covid restrictions limited the distance we could travel.
We decided on a linear walk from Corgarff at the foot of the Lecht road down to Bellabeg in Strathdon.  By the A944 road this isn't a particularly long route but we intended to use parts of altogether older roads.  We would also link a series of bridges which have historical interest - the "bridge" theme would continue in that our route would bridge a gap between walking routes we know well. 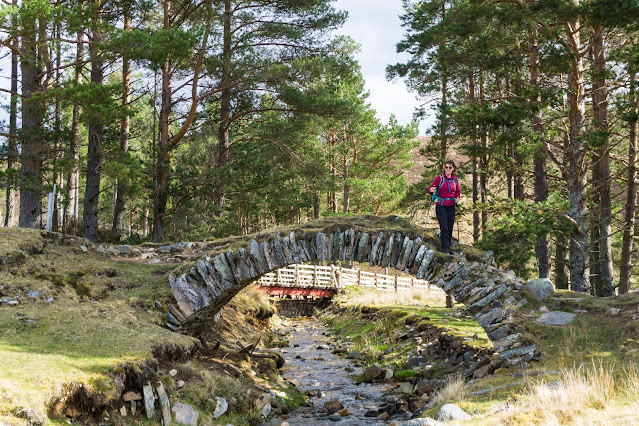 We set off on a lovely Spring morning, heading SE from Ordgarff along the track which is signed as "Old Military Road".  This simple statement has a deal of history behind it because this is a section of road built between 1748 and 1757 as part of  a massive roadbuilding and infrastructure project following the 18th century Jacobite rebellions.

That said, the first of the bridges isn't typical of the "Wade Bridge", being a graceful, slender arch over the Allt Damh - seemingly defying gravity! 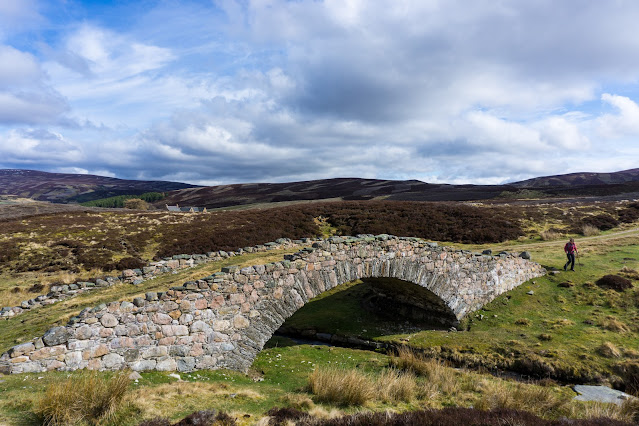 Just under 2km further along the track is Delavine Bridge.  This is much more representative of the bridge construction on the 18th century military roads.  Delavine was one of three bridges repaired and stabilised over three years from 1997 to 2000 to keep these scheduled monuments intact.  A plaque on Delavine bridge records the work, placed on the outer parapet where it is particularly difficult to read without standing in the burn itself!  It is typical of the larger bridges of the period in construction and in being 4 metres wide.

The familiar term is "Wade roads" and "Wade Bridges" in reference to General George Wade, a military Commander in North Britain from 1724 to 1740.  Wade is actually the only person named in the British National Anthem - one of the more clunky verses which isn't used today reads:

The "Wade" road here is part of a 100 mile (160km) route from Coupar Angus to Fort George near Inverness via Braemar, Corgarff and Grantown on Spey.  The whole route was built in nine years between 1748 and 1757, starting just two years after the final Jacobite defeat at Culloden Moor.  For context, the 26 mile/42km Aberdeen Western Peripheral route took five years to complete in the 21st century!

By the time construction of this road was started Wade had long since left the Highlands and in fact died in the same year work on this route started.  His successor, Major William Caulfeild (note the spelling, not "Caulfield") was appointed Inspector for Roads in Scotland in 1732.  While nowhere near as well known as Wade, Caulfeild oversaw far more of the network: Wade was responsible for 250 miles (400km) of road, forty bridges and two forts; Caulfeild  for 900 miles (1400km) of road and over six hundred bridges - an astonishing series of works.

The road we now walked is part of the longest single stretch Caulfeild built at 100 miles and the line it took was clearly good because the vast majority of the route is still public road, suitably upgraded for modern traffic. This stretch wasn't absorbed into the road network and remains as a great walking route.
The ingenuity, effort, endurance and craft of the road planners and of the regiments of soldier-navvies who constructed the military road network is a great testament to one of Britain's greatest engineering feats. 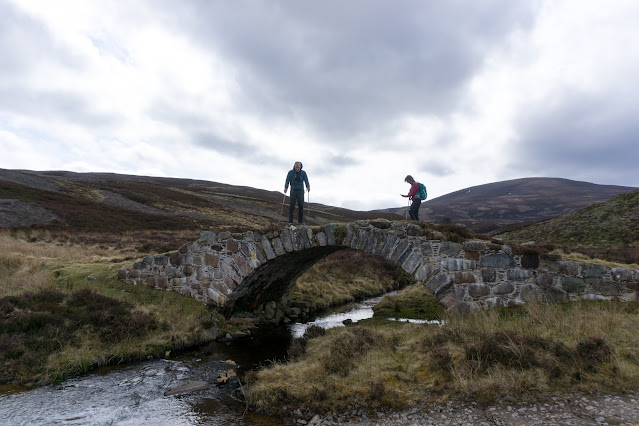 A little over a kilometre further on the road crosses the third bridge of the section, this one spanning the Burn of Tornahaish.  Here also the bridge required restoration works and all three bridges on the section are now leased from the landowner, Candacraig Estate, by the Gordon Trust on a 99 year lease.  Smaller than Delavine and without a parapet, the span and height above what is a very small burn gives an indication of the volume the Burn of Tornahaish is capable of in spate. 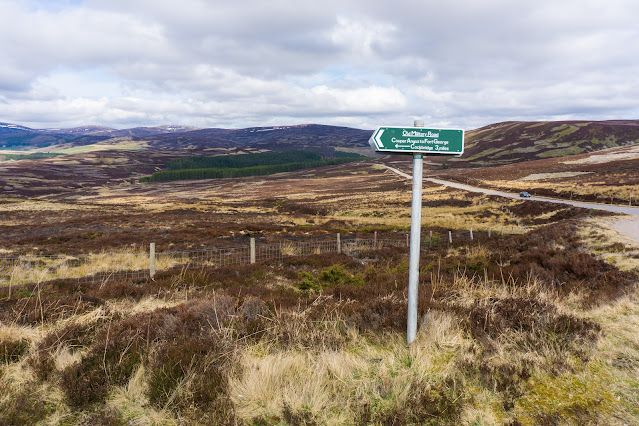 The track climbs up from Burn of Tornahaish to join the A939 road, or more properly become the A939 road.  From here the Military Road goes to Gairnshiel then on over the hill to Crathie on Deeside.  We walked uphill for a short way before leaving the road on a track cutting back uphill, having bridged the gap of several kilometres between our previous walks.  Here we had a choice of routes to reach Bellabeg.  One route would take us over to link with a lower level walk we've done before while the other would climb up onto the high ground to cross the summit of Scraulac - a route done several times previously.

We chose the higher level option as the weather was good and we were in no particular rush.  The summit of Scraulac (which I think may be from the Gaelic for Scree Place) is really wide, though today a bit breezy too.  An estate worker passed us on a quad bike here and was the only other person we saw on the entire route.
We left the estate tracks to descend Scraulac's north east ridge, finding a remarkable hidden building en route.  A good track which became a metalled road soon led us down to the public road at Culfork.  This really is a "road less travelled", a loop of minor road running parallel to the A944 but on the opposite side of the river Don.  A relatively new venture along here is Cairngorms Glamping and Camp Site, which looks to be a super place to spend a holiday! 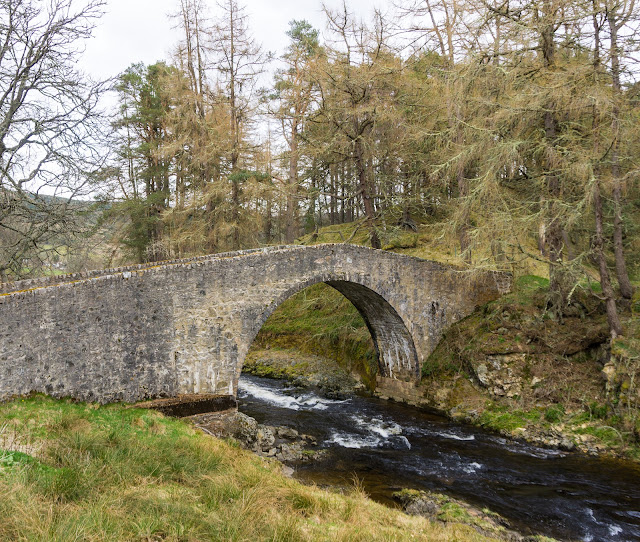 Cutting off the road just outside Bellabeg, a track descends around a wooded hill to the last of the historic bridges of our walk.  Poldullie Bridge was constructed in 1715 by Sir John Forbes of Inverernan and crosses the River Don. A remarkably graceful single span bridge, the elegant form is best seen from above as in the images on the Canmore site.  Sir John Forbes made a fatal choice in throwing in his lot with the Jacobites at the 1715 rebellion and was captured following the battle of Sherrifmuir.  He died in Carlisle prison the day before the date of his execution.  It was this rebellion which prompted much of the roadbuilding effort in Scotland in order to "pacify" the Highlands.  Movie buffs might recognise Poldullie Bridge as it featured in the 2019 film "Mary Queen of Scots".

From Poldullie Bridge we climbed a steep bank to the main A944 road and strolled downhill to Bellabeg where we'd left a car earlier in the day.
This had been a great walk with lots of history and great views.  The route we took is 19km/11.8 miles and it took us six hours at a fairly relaxed pace with a couple of stops.  Ordnance Survey 1:50K Landranger map 37 (Strathdon and Alford) covers the whole route.  As there is no public transport between Bellabeg and Corgarff this route does require two cars and a shuttle.  It would also make for a great mountain biking route with scope for variation.
Posted by Ian Johnston at 17:01