Powered up on Loch Ericht 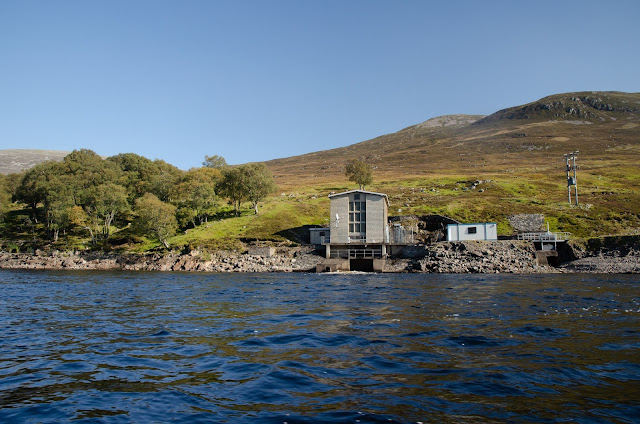 After our hillwalking diversion we had a cup of tea on the shore before getting back on the water to complete our return leg up Loch Ericht to Dalwhinnie. Near to Corrievarkie is the turbine house for a hydro-electric power scheme.  This station produces 2.2MW of power and is fed from Loch Garry in the hills to the east of Loch Ericht.  There's a 55 metre height difference between the lochs which gives the "head" for the water.  This scheme is part of the larger and widespread Tummel hydro network. 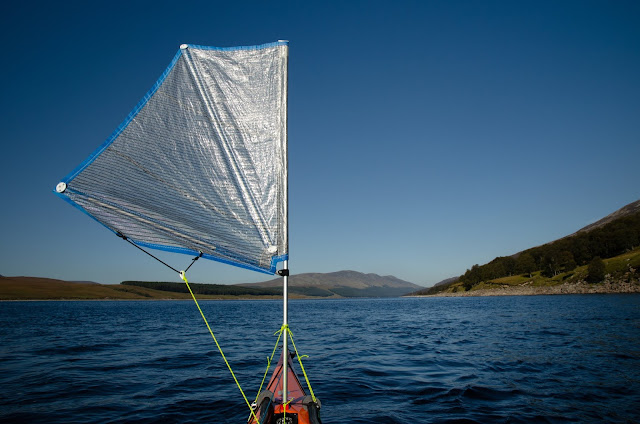 A following breeze was very welcome and we hoisted our sails to get some assistance on the long run back up to Dalwhinnie. 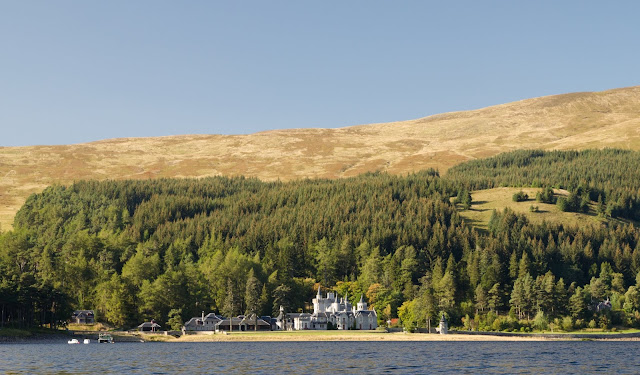 Keeping to the eastern side of the loch, we got a good view of Ben Alder Lodge in its grand wooded setting below hillsides already touched by the blonde shades of autumn.  The stalking season would get into full swing a few days after our visit and there was plenty of activity on the estate road leading down the west shore from Dalwhinnie. 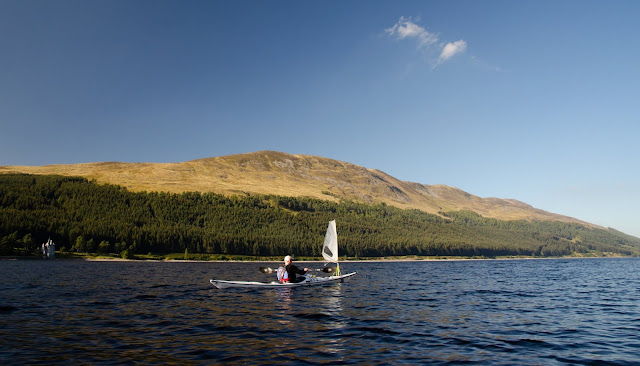 Not long after this image was taken the serene, pleasant paddle-sailing ended.  At a slight twist in the loch the wind began to blow in mighty gusts which were rolling down from the steep slopes to our right (east) side.  We assessed later that these might have been turbulent rolls of wind rushing downslope from the steady easterly flow over the high ground but whatever the cause, the effect was very dramatic.

Before we could drop our sails the wind caught our boats with considerable violence.  I was driven downwind at a terrific rate and had real concern about the sail and mast being torn from the hull of my boat.  For a few moments I had little or no control over either direction or speed and just hung on, bracing hard on the paddle with a rooster tail of spray tailing back from the submerged blade.  I glanced up at the top of my mast and wished that I hadn't, the whole thing was being forced into an arc by the pressure of wind.  As soon as it had started the gust subsided and we dropped our sails hastily.  Checking my GPS later, it had briefly recorded a speed of 15Km/h during this gust.

We continued to experience these gusts until near the top of the loch when the wind simply poured out of a valley, hammering across the loch and making for quite challenging conditions as it blew from the starboard quarter at a solid F6 for some ten minutes.  Then, as soon as we were out of the firing line of the valley, the wind subsided again to almost nothing.  Paddling on Loch Ericht needs careful planning, the orientation of the loch catches the prevailing wind but even in light crosswinds the topography will give tricky conditions at times, with the area between Ben Alder Bay and Corrievarkie seemingly a real wind tunnel. 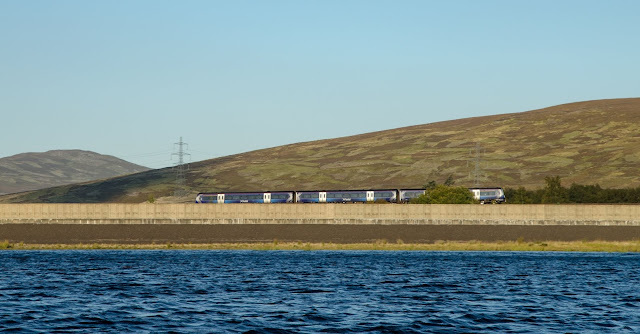 As we approached the dam which holds the northern end of Loch Ericht our return was marked by the noise of traffic from the nearby A9 trunk road and the slightly strange sight of a Scotrail train belting north towards Inverness.

We pulled into the bay near the inflow of the aqueduct which brings water from Loch Cuaich on the other side of the road and railway.  The water in Loch Ericht is used in it's turn to feed the hydro electric power station on Loch Rannoch, and thence to Tummel in an interconnected hydro scheme.

Our paddle and hillwalking trip had been short in time, but we'd done quite a bit.  In a little over 24 hours we'd covered 47km/29 miles of paddling and done a 10Km hillwalk with around 550 metres of ascent.  Allan remarked wryly that I'd managed to plan three days of a trip into one overnight journey!
Posted by Ian Johnston at 21:07