Not quite an island... not quite the mainland

Morvern isn't quite an island, though it has the feel of being one.  Shaped roughly like an inverted triangle, it's almost surrounded by water with Loch Linnhe to the east, the Sound of Mull to the south west and Loch Sunart moating the majority of the northern flank.  Only at the north eastern corner is the peninsula attached to Ardgour, itself almost surrounded by water, by the 11 kilometre Glen Tarbert (from old Norse and meaning "draw boat"- an indication that boats could be portaged between bodies of water)

Adding to the island feel is the fact that the simplest access is by ferry from Lochaber. I've paddled most of the Morvern coast but not previously done the journey around the peninsula as an "integrale" trip.  A rather changeable forecast had prevented Douglas and I planning anything exposed to wind and swell, but we thought that the general easterly airflow might suit this trip.  Douglas has done the route previously and really enjoyed it, which is recommendation enough!  We were delighted that our friends Mike, Phil, Donald and David could join us, and quite by chance I met Ronnie in the ferry queue - he was on a separate trip but could meet us for one night of the journey. 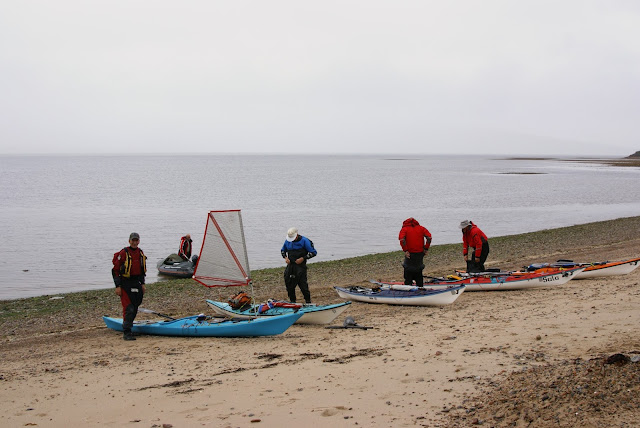 We met up at Inversanda Bay on a rather drizzly mid-August morning and carried our boats down to the beach.  Inversanda should indicate that this is the mouth of Glen Sanda, but curiously, it's actually the eastern end of Glen Tarbert and where the River Tarbert enters Loch Linnhe.  It's possible to park a couple of cars off the road here, but care needs to be taken not to block the farm track.

We shuttled a car over to our planned finishing point of Strontian at the western end of Glen Tarbert and were ready for the off....... 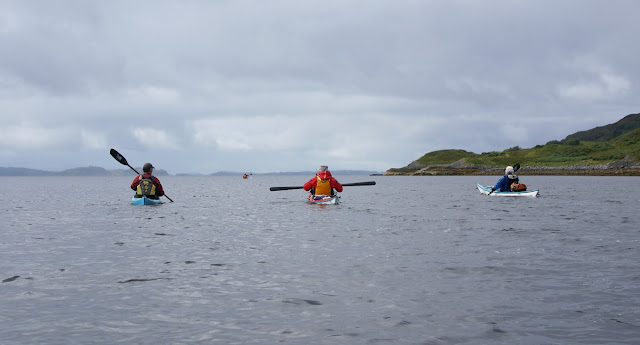 ...wasting no time in getting underway as our first day would be quite a long one. 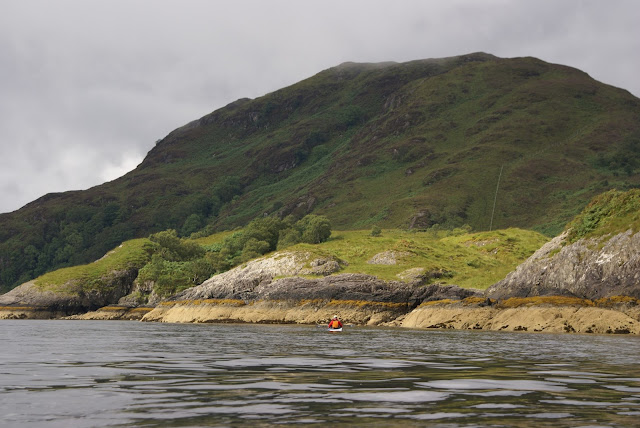 For all except a short stretch, no road goes down the Loch Linnhe side of Morvern and there's an immediate feeling of a wild coast.  A long and wide sea loch, Linnhe has much to offer the sea kayaker and seems relatively overlooked. 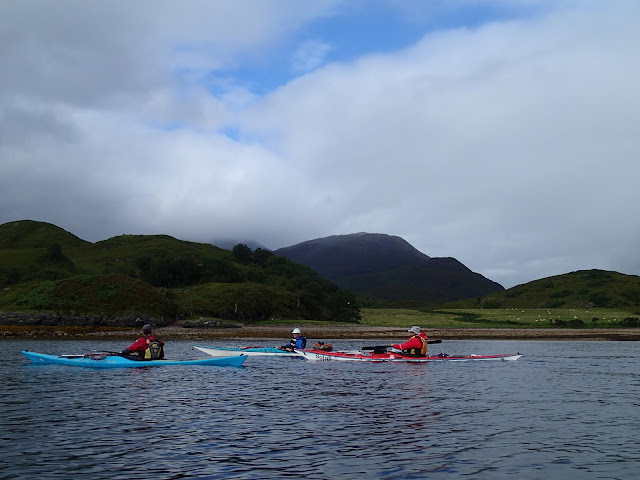 A bonus was that the drizzle ceased and the cloud began to clear away.  We began to warm up in our waterproofs, so a second breakfast stop seemed in order..... 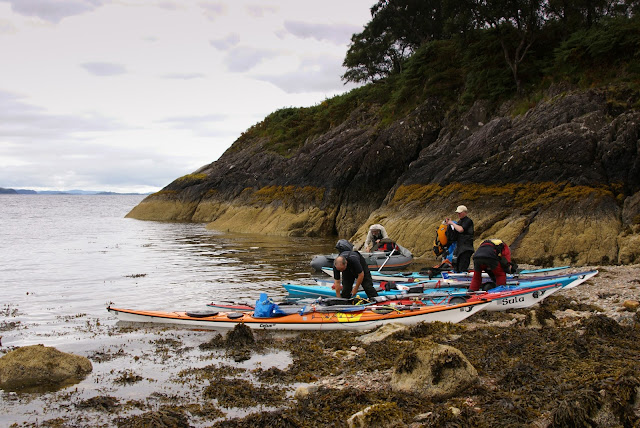 ....where we removed waterproof jackets to the delight of the waiting midges, not entirely unexpectedly!  Donald could at least get offshore in his F-RIB and create his own breeze, the rest of us had to put a spurt on once back on the water to leave the little blighters behind. 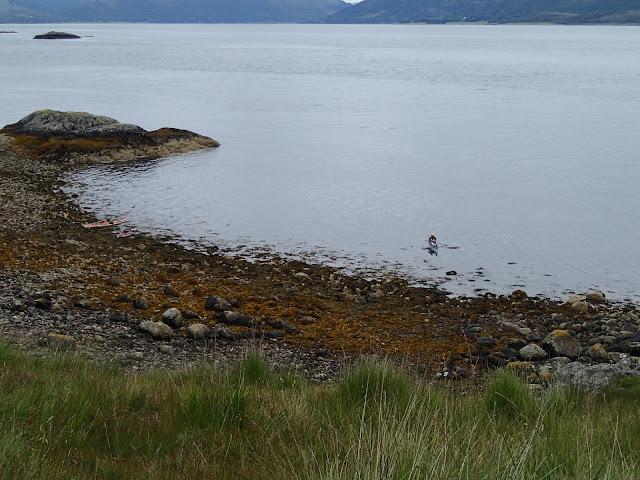 A little further down the coast, I spotted a stone building tucked into the hillside above the shore.  An investigation seemed worthwhile, so Douglas and I climbed up the grassy slope to take a look. 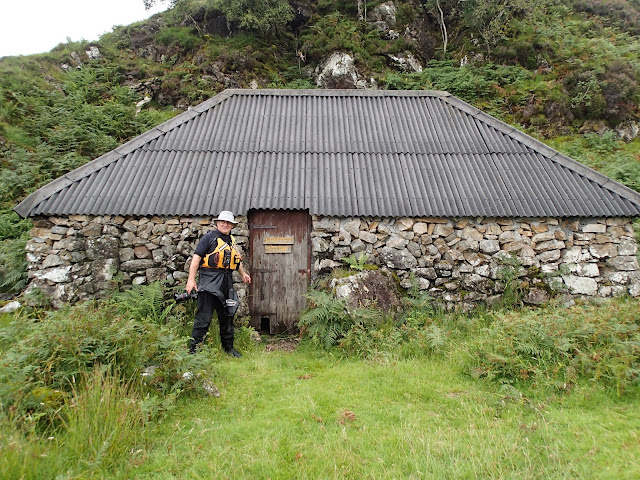 The building proved to be "Pirates Store", a bothy belonging to the nearby Abernethy Trust centre at Kilmalieu.  The Trust is a Christian organisation which provides outdoor adventures and has bases around Scotland.  Inside the bothy is a notice welcoming visitors and asking that the place be left tidy - in effect the same principles as the MBA Bothy Code, though Kilmalieu is privately owned. 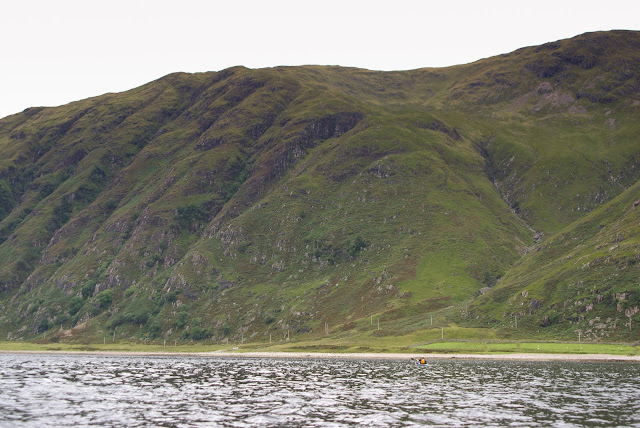 The others had paddled steadily on ahead while we looked at the bothy, and we caught up with them a little further on...... 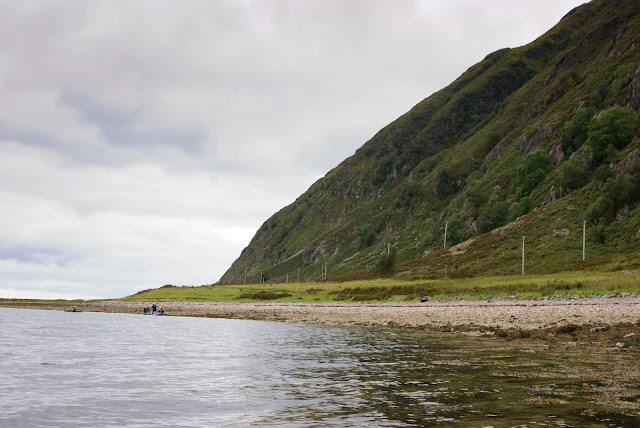 ....where they were waiting on a shingle beach below wooded slopes.  The scenery here is wild, with the only man-made elements a tiny road and a line of power lines squeezed hard against the shore , but to the south of here we knew that there was perhaps one of the most incongruous sights on any sea loch.
Posted by Ian Johnston at 10:29