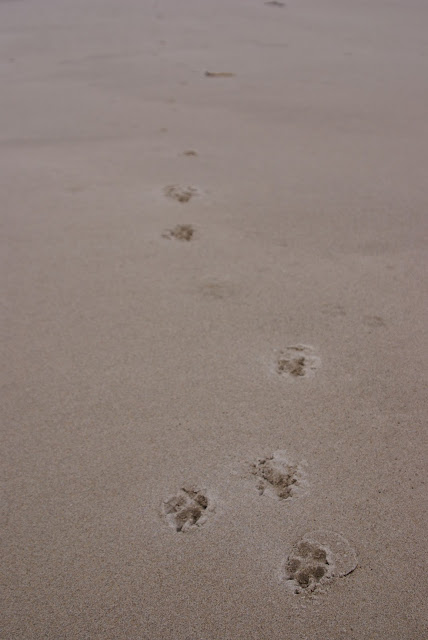 We weren't the day's first visitors to the beach at Strathmarchin Bay when we landed for lunch, a line of tracks led purposefully from one side of the bay to the other.  I assumed that they might be Otter prints but on checking properly they're almost certainly the tracks of a Fox. 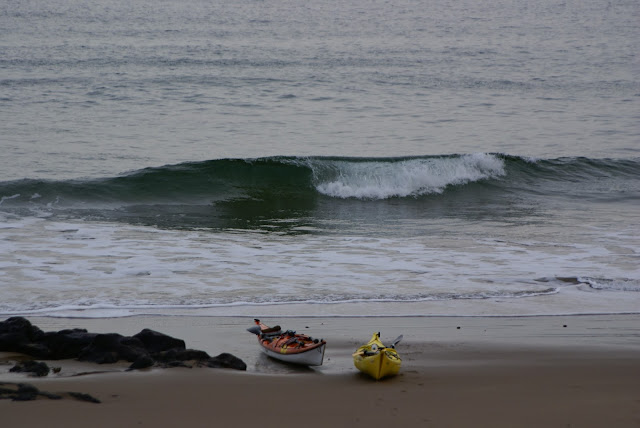 The low and long-period swell coming into the beach was showing no signs of dropping away although the offshore breeze had eased quite a bit since we'd set out.  We waded out a little way and waited for the bigger sets to come through before clambering in and paddling out past the break.  I was one wave too early and got a nice refreshing shower, Allan's timing was once again much better! 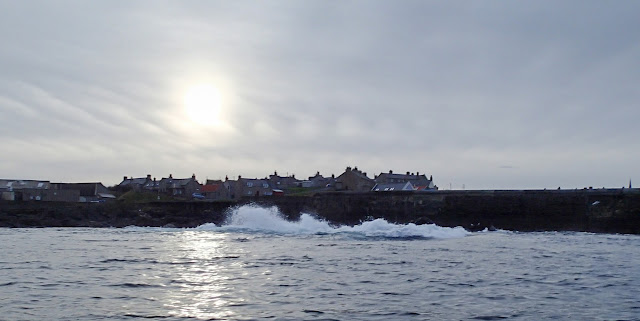 The morning's wind had now dropped to almost nothing, a welcome change from what seemed to have been weeks of gales.  Most of the beaches on the coast between Strathmarchin and Sandend are stony and were exposed to the northerly swell so we decided to make a quick stop in the harbour at Portsoy....... 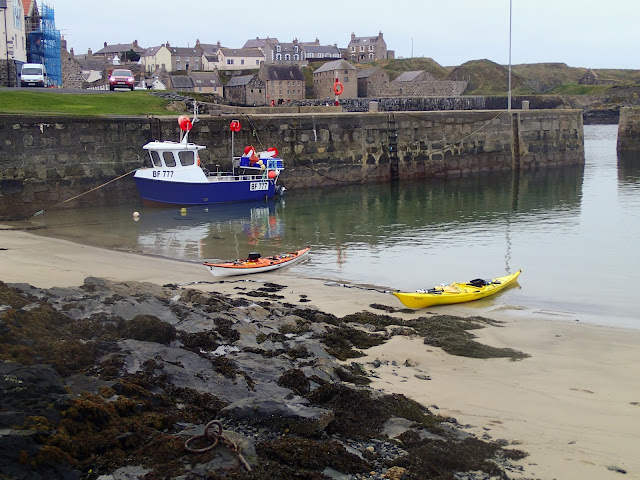 ...where we could land easily in the outer harbour and empty our cockpits of the last of water from the surf launch. 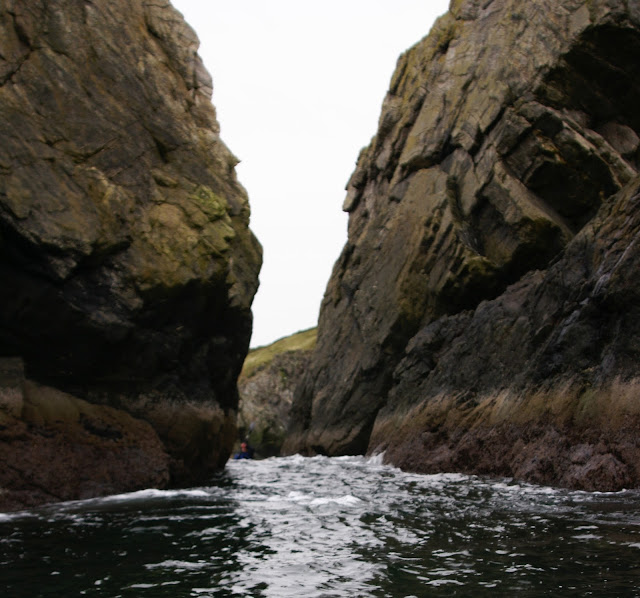 As we'd set out at near low water some of the channels and stacks we'd normally explore didn't have enough water on our outward leg.  At mid-flood there was more opportunity and the swell made for some fun too.... Allan's in there behind one of the hills of water...... 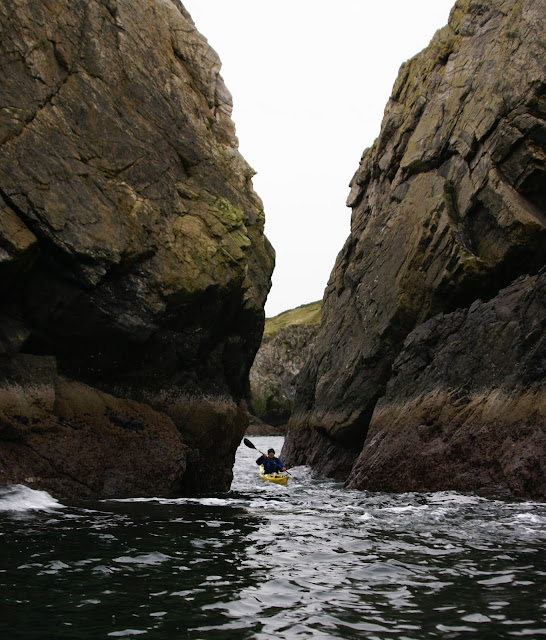 ...which were rolling through this gap - great entertainment!  The tide-line on the rock gives a good indication of the swell height. 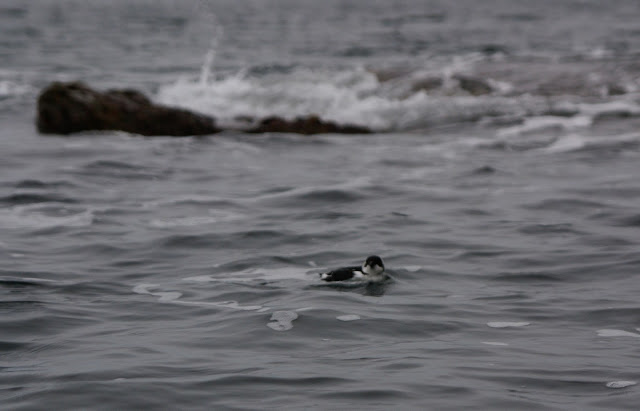 Rounding the West Head into Sandend Bay we came across this little chap swimming close to the cliffs. 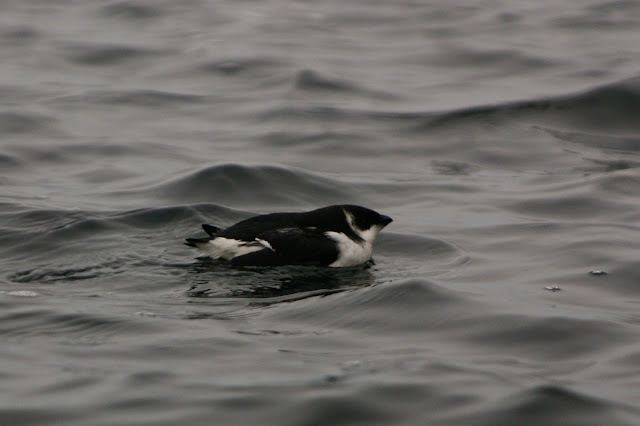 Little Auks (Alle alle) are winter visitors to the north and east coasts of the UK in small numbers and can sometimes be seen following northerly gales.  At 20cm long and weighing around 150 grams Little Auks are about the size of a Starling, by far the smallest of the European Auks and among the most numerous at an estimated 15 million breeding pairs.  The species nests on islands in the high Arctic and after the young fledge the eastern populations move to wintering areas between Iceland and Greenland along the edge of the drift ice.  It seems incredible that these tiny birds can be absolutely at home on the open sea in the savage conditions found at such high latitudes.

Probably blown downwind in the long series of gales in November, this was the first Little Auk I've seen on the Moray Firth.  Confiding and even curious, it seemed very relaxed at our close proximity and it's entirely probable that Allan and I were the first humans it has encountered.  We backed away and left the bird in peace; it will probably have quite an adventure if it's to get back on course.

Our own brief visit to the Moray Firth was nearly over; a short day snatched between gales and limited by  the seven hour day length of December.  As we paddled back into the tiny harbour at Sandend our VHF radios were receiving the maritime forecast from Aberdeen Coastguard with a warning that the next gale was "expected soon".

With impending work commitments due to take me away from home for a few months this was likely to be the last day of paddling in 2015 and it had been a really good one.
Posted by Ian Johnston at 21:02