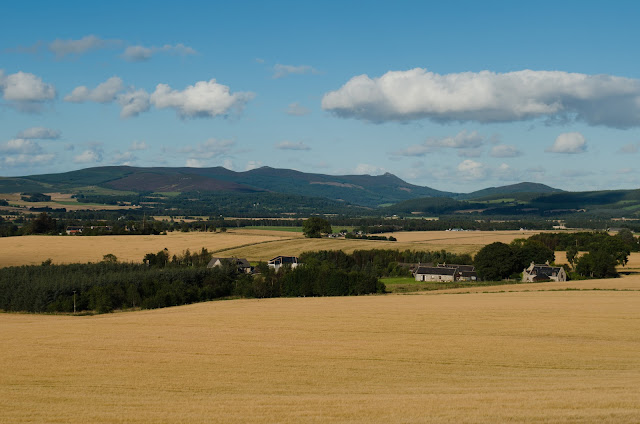 After a tricky year for farming with an early Spring followed by a generally wet and windy Summer, the crops are nearly ripe.  All over the Aberdeenshire landscape there are golden fields of barley and oats - the main crops hereabouts.

Beyond the fields, the local landmark of Bennachie provides a backdrop of dark green forest and purple heather moor.  The prominent point on the right hand end of the ridge is the Mither Tap, crowned by a Pictish hillfort. The highest point on the hill is actually Oxen Craig which is the centre point in this view. It's a favourite hill for all kinds of folk, even those who would never climb it, and visible from most of Aberdeenshire despite a modest height of 529 metres/1735 feet.

This field of barley  (Hordeum vulgare) has about a week or so to go before it will be ready to harvest.  The ears are perhaps smaller than in some years, but at least it has reached this stage.  Most Barley will be used for animal fodder for the other Aberdeenshire staple - beef.  Some of the best grain will be used for whisky distillation after it has been malted, which involves soaking in water to start the germination process, then halting it by drying.

Looking towards our house from a small rise the patchwork of green and gold is everywhere. Some of the crops are already beginning to be harvested; the big Combine machines working day and night to get the crop in. 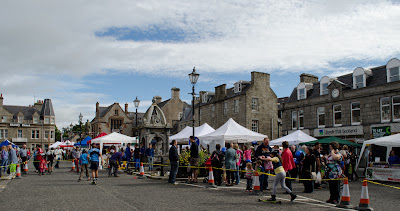 Last weekend saw the "Hairst" (Harvest) farmers market at nearby Huntly with cookery demonstrations, music and other events supplementing the regular monthly market.  It's a really important time of the farming year.

The farmers will be hoping that the weather stays relatively dry and settled for the next couple of weeks in order that they can get the crucial task of harvesting completed and secure the promise of the fields.
Posted by Ian Johnston at 09:27