Wind and Water in Glen Muick

Yesterday I had a mountain bike ride at Glen Muick (the glen of pigs).  A road runs from the town of Ballater, over the River Dee and then a minor road goes the 12 kilometres up the glen to a car park and small interpretation centre run by the estate Ranger Service which has some interesting displays about wildlife and landforms on the estate.

The ride up the glen was into a stiff headwind, and higher up, blustery rain showers.  There's also about 300 metres of ascent, so it wasn't the fastest ride I've ever done! 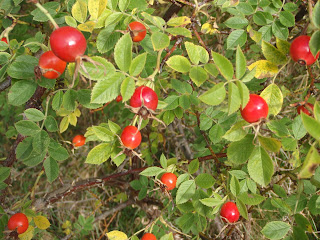 At the roadside, these Wild Rose hips were glowing in a patch of sunlight. 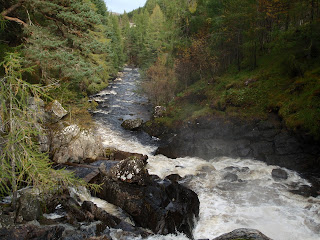 It can be a very fast and furious bike ride back down the glen on an estate track on the west side of the river, but go too fast and you'll miss the falls on the River Muick.  Today there was plenty of water in the river and a plume of spray was blowing up from the peaty water crashing down the fall.  To the left, a "salmon ladder" can be seen, a sort of by-pass for fish heading upstream to spawn.  To get this photo it was necessary to walk out on a narrow ledge with the falls one side and the ladder the other - MTB shoes with a metal plate in the sole are a bit scuttery! 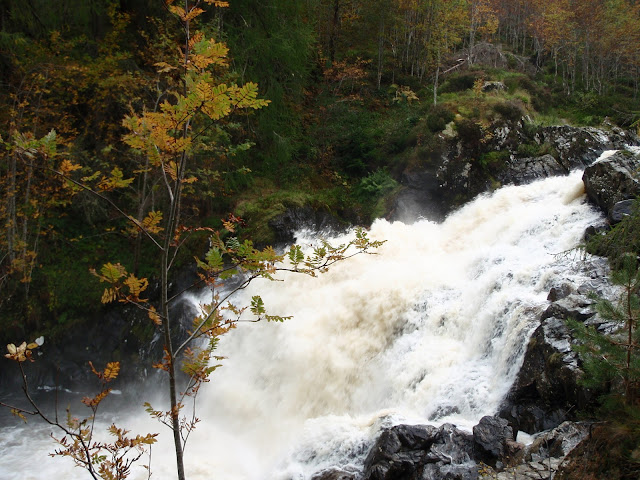 From further down, the source of the spray is easy to see as the water crashes over a rocky obstruction.

The track then follows the river down the glen before a minor road is met past Birkhall and back towards Ballater.  This ride is just over 30km, so doesn't take too long, and can be extended by riding around Loch Muick itself, though there's a rough and difficult section for bikes near the head of the loch.
Posted by Ian Johnston at 10:17